After a few hours traveling on the Interstate highway from Los Angeles, we reached Needles, CA, the last exit on I-40 east bound before entering Arizona. Most people would pass this exit unless they need to stop for fuel at the gas station nearby. We exited the Interstate highway here because we wanted to take an alternate, ‘scenic route,’ the old Route 66 between Needles and Kingman, AZ.

We decided to explore this segment of Route 66 because it’s among the best representation of old, historic route that ended up getting bypassed and replaced by the modern Interstate Highway. The old route goes through a winding road on the Black Mountains area. It’s scenic, but not the fastest way. The Interstate highway cuts through another part of the mountainous region and provide a shorter and faster route for those who need to speed up to get through the area.

Another reason why this old route was interesting to us is because it passes two points of interests, a ghost town called Oatman, and a restored rest stop called Cool Springs. Again, more historical look at what Route 66 looked like back in its heyday.

After we passed the town of Needles and entered into the state of Arizona, we followed the road sign to Oatman. Gradually we went from driving on a busy four-lane highway to a smaller two-lane road that led towards the mountain. It felt like we’re alone in the middle of nowhere and heading to a dead end, until we saw a sign indicating we’re on the historic stretch of Route 66 and we’re only few miles away from Oatman.

The photo below was taken as we’re getting closer to Oatman. You can see that the road is not much traveled anymore, and there is the historic Route 66 marker. 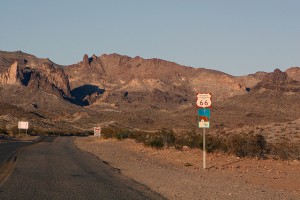