One of the famous landmarks in Maine is the Bass Harbor Head Light House near Acadia National Park. It’s one of the most photographed lighthouses in New England, which means that if you go there to take the iconic photos at sunset, it’s very likely that you will not be the only one with that great idea. I arrived at the location about a couple of hours before the estimated sunset time, enough time to look for the spot to take the iconic shot of the lighthouse. There were already a couple of other photographers getting set up, so I found a spot on the rocks to get my tripod and camera ready for taking the shots. I thought all was great, until more and more people arrived as we got closer to the sunset time. Some were respectful of the photographers who were already there, and picked spots on the side that would not interfere with the view of the other photographers. But there were only limited room to ‘spread out’ so before long people started jockeying for positions to take photos, even if that meant obstructing others’ view. Somewhat annoying, especially for those who had come earlier to find good spots to set up. After some positional adjustments and using a zoom lens to limit the view to only the lighthouse, I was able to get some shots of the lighthouse. But then I thought of an interesting point of view — rather than ‘fighting’ the other photographers, why not capturing that very experience of having photographers taking photos of the landmark. So I took few steps back, changed my zoom level, and shot the photo below. 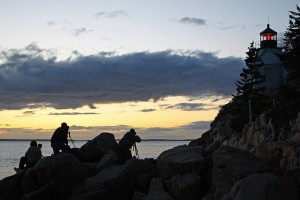