I started the last day of my New England road trip with a visit to The Breakers, a mansion in Newport, Rhode Island, owned by the Vanderbilt family.

In the late 19th century, the Newport, RI, area became a summer destination for the wealthy Americans. There are several of those mansions that today became museums that you can visit. But one that is definite a ‘must visit’ is The Breakers, a 70-room mansion built by Cornelius Vanderbilt II (who was among the wealthiest persons in the United States at the time). He spared no expense in building this mansion. The home was constructed between 1893 and 1895 at a cost of more than $12 million (approximately $316 million in today’s dollars adjusted for inflation).

During the visit there, as part of the admission you get a headset/handheld player for a self-guided audio tour of the home. So you can spend as much or as little time on any part of the home. You’re not allowed to take photos inside the home, but you’re allowed to do so at the balcony outside and at the grounds around the home.

Here are some of my thoughts from my visit to this huge mansion. The home was definitely impressive and opulent, though it’s not my style preference (I like the modern style of interior design, more minimalist and clean style rather than the ornate). It’s mindboggling to think that this was only a vacation home for the Vanderbilt family, not their primary residence. The sad part of the story was that Mr. Vanderbilt could only enjoy the home that he built for four years, as he died due to a stroke in 1899. And it seemed that none of the Vanderbilt children except their youngest one, Countess Gladys Széchenyi, liked the property (she ended up inheriting it from her mother). Today it is preserved and opened up as a museum that provides a view to the life of the American rich and famous from the 19th century.

The photo below was taken at the balcony of the home’s second floor. Personally I thought the balcony was my favorite space in this home as it felt like a getaway from the heavily decorated rooms inside the home, and the ocean view facing the east was awesome and peaceful. 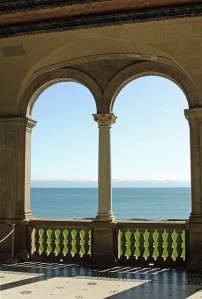