A couple of days after visiting Crater Lake, I went on a road trip with my family north from Oregon to Washington State. We spent several days sightseeing with Seattle as our base. On one of the days, we went on a day trip to Mount Rainier National Park which is located only around 60 miles away from Seattle. Mount Rainier is the most topographically prominent mountain in the contiguous United States with summit elevation around 14,400 feet. It is also considered as one of the most dangerous volcanoes in the world, given that it’s still active and its location that is close to largely populated areas. On a clear day, if you’re in Seattle-Tacoma metro area, Mount Rainier would dominate the southeastern horizon view from the city.

We spent our time in the park mostly driving around the loop road to enjoy the mountain scenery. Given that we had a large group of people (around 20 people in four cars) and varying age and level of fitness, we didn’t do any physical activity like hiking or long walks. But since most of the family members came from Indonesia, it was still a treat for them to be able to get high enough in altitude and even during the summer month they could enjoy the fresh mountain air and saw the snow-covered peaks.

The photo below was taken during the drive in the park. You could see the prominent peak of Mount Rainier in the distance. 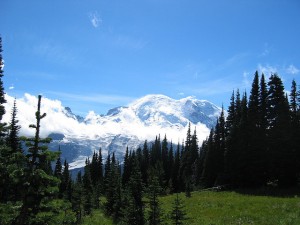