I visited the Kings Canyon National Park right after visiting the Sequoia National Park. We drove through the General Grant Grove area and continued eastward until we reached the end of the paved highway. It was towards the end of the day, and there were hardly any other visitor in the area, so it really felt like we’re alone in the middle of the nature. It was very quiet and peaceful out there.

The photo below was taken when we stopped at the east end of the paved highway through Kings Canyon. In the distance is the Kings Canyon and the mountain range around it. We didn’t go on any hike down the canyon, but even just from this overlook we could imagine it would be quite an experience going through the backcountry and experiencing the nature there. 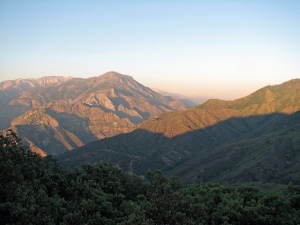