The Vietnam Veterans Memorial is located at the National Mall area in Washington, DC, near the Lincoln Memorial. This memorial was created to remember the US armed forces service members who died in Vietnam/Southeast Asia and those who were Missing in Action during the War. The memorial was designed by architect Maya Lin, who won the design competition as a 21-year old Yale University student. The design was a source of controversy given its unconventional design. But over the time, people came to appreciate the beauty of its simplicity and emotional power of seeing the wall with names of those perished and missing.

I think the most moving part of this memorial is not only seeing the list of names of soldiers who perished during the War, but often times observing visitors coming to visit to look for a specific name of someone they know, and also seeing pictures, notes, letters, and other item left at the wall to remember someone.

The photo below was taken during a visit one weekend last summer. There were many people there, including a group of veterans, some in wheelchairs, coming to visit the memorial. There were also groups of young students who only learned about the Vietnam War from history books. As I saw one of the wall panels closely, I saw a reflection of the other side of the wall with visitors observing the wall, the Washington Monument and blue sky in the background, and an older gentleman observing the wall on the left corner, and the names etched on the wall. It made for a unique perspective to capture a scenery at this memorial. 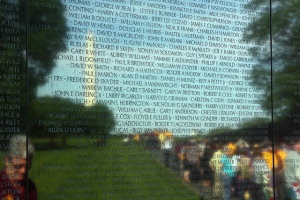