The Jefferson Memorial is a monument located near the National Mall in Washington, DC. It is situated south of the White House and the Washington Monument, and near the Tidal Basin. The monument was dedicated to Thomas Jefferson, one of the American Founding Fathers (he was the principal author of the United States Declaration of Independence) and the third President of the United States. It is among the prominent landmarks in downtown Washington, DC, and it is usually the focal point of the annual Cherry Blossom Festival since the largest concentration of the cherry trees in downtown DC is located around the nearby Tidal Basin.

I’ve visited the Jefferson Memorial many times, most of the time around the time of the cherry blossom time as I walked around the Tidal Basin to photograph the scenery. It is definitely one of the landmarks that visitors to DC should visit. Not only you would be able to learn about one of the key figures in the founding of the United States as a nation, but also you can enjoy a beautiful scenery of Washington, DC. You can see both the White House and the Washington Monument straight across the Tidal Basin from the Jefferson Memorial.

The photo below was taken in the morning before the sun rises as I waited for a Washington Photo Safari tour during the Cherry Blossom Festival to take place. It was pretty quiet and you could see the monument by itself with the statue of Jefferson inside, without any of the visitors in the scenery. 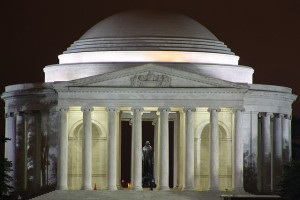