Another part of experiencing a culture is the interaction with the people. You can learn about the good and the bad of a culture from the experience interacting with the locals during your stay. It is helpful, however, to read up about the culture before you go. Many guidebooks (and online travel guides) have good information about what to expect when meeting the locals, and some also warn you on what to avoid.

Our first interactions with the locals during our visit to Bangkok, Thailand, were true to what was said about the Thai. They were very friendly, kind, and you’re met with smiles. We were off to a wonderful start during our full day in Bangkok with an unexpected birthday gift for my cousin Kristi from our hotel staff. We also received helpful advice before we left and the hotel provided us with a map that covers the areas that we wanted to visit. The hotel manager also gave us a curious warning when visiting the Grand Palace: beware of anyone saying that the palace is closed and that you need to go back later. I wasn’t really sure why anyone would tell that to tourists…

When we walked closer to the temple of Wat Pho, a gentleman standing at the street corner came and said hi to us in English. I guess it was obvious that we were tourists — our backpacks, cameras, and maps gave it away. The gentleman asked us where we’re from, our impressions of Bangkok, and where we’ve visited. He also asked where we were going to go. When we mentioned that we’re on our way to Wat Pho, he said Wat Pho was closed at that time of the day due to a ceremony, and that we should come back at later time. Then he asked me for my map, and started pointing out places on the map where there are other temples to visit. He suggested that we visited those first, and then come back to Wat Pho when the ceremony was over. He also said that he could help us finding tuk-tuk to drive us to these other temples as they are a bit too far to visit on foot. We had quite a packed schedule for the day and were planning on being elsewhere for a scheduled tour later on that day, so I politely declined the offer. We were about to continue walking towards the entrance of the temple when he told us to go to the other direction — he said there was nothing to see in the direction we were headed to. I just smiled and continue walking to find out that we were heading to the right direction. The temple was open, and there were other tourists around visiting as well.

Later on, on our way out of the temple to go to our next destination, the Grand Palace, we were stopped by another gentleman at the temple exit. He asked for our tickets, and when I gave him those, he marked the tickets and asked me where I was going next. When I said we were heading to the Grand Palace, he told us that the Grand Palace was closed around noon time for a ceremony, and he suggested that we should visit other tourist attractions before coming back. Sounds familiar? It was the same thing… another scam to get independent tourists to go on tuk-tuk ride elsewhere in the city.

So I think the lesson learned from that experience is to expect the best from your experience interacting with the locals, but don’t let your guard down and be a victim of scams… It’s always good to learn about this beforehand by reading guidebooks or learning from other people’s experiences.

The photo below was taken inside the Wat Pho complex. The large stupas were built to commemorate the first four Thai kings. As you might have guessed… there was no ceremony going on that morning, and tourists were free to come and visit the temple. 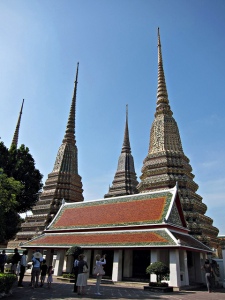