McDonald’s is one of the most well-known American fast food chain restaurants in the world, with more than 33,000 locations in 119 countries. In the United States, in the recent years McDonald’s and other fast food restaurants are getting bad rap because of the nutritious value of the items of their menu, and the tendency to promote large portion of the food (there was a documentary called Super Size Me few years ago following a person doing an experiment of eating nothing but McDonald’s food for 30 straight days and then observing the negative impact that had on his health). Along with that, as obesity is also becoming a big problem in the American society, there is more and more emphasis on eating healthier and, for many this means avoiding eating fast food altogether. I myself generally don’t eat at McDonald’s, except once in a while when I’m on the road, needing a break, and having local McDonald’s conveniently available somewhere as a rest stop.

One thing interesting is to see how different people in other countries view McDonald’s restaurant. Rather than being a common place restaurant that in many cases are being avoided, in other countries (at least I observed this in Indonesia and Thailand), McDonald’s is actually viewed as a foreign restaurant that is actually a cool and trendy place to visit. It’s an American thing — and for many, that’s different and actually valued (I guess it’s similar to Americans looking at ethnic restaurants as a cool thing because it’s a rarity — even though in the country of origin the food served there might be common place).

When we visited Bangkok, Thailand, after spending several hours walking in the hot and humid outdoors, we saw a McDonald’s with a McCafe in it near the touristy Khao San Road area. Though in most cases we would prefer going to local establishments and try something local, we couldn’t resist the thinking of going to an air-conditioned restaurant and getting nice, cold drinks from a menu that we somewhat knew already, and knowing that very likely it followed standard quality guidelines. So sometimes having something that’s of a known quantity is a good thing.

The McDonald’s and McCafe that we visited were pretty much like a standard restaurant setup I’ve seen in the United States. I didn’t pay much attention to the McDonald’s side of the restaurant to see its menu (in Indonesia the McDonald’s store has items not found in American McDonald’s and targeted towards the locals, like rice porridge or fried chicken with rice), but the McCafe side pretty much had similar menu like the American stores. As for clientele, it was pretty interesting to observe. Given its proximity to the backpacker/budget traveler area of Khao San Road, we noticed many westerners coming there — looked like folks who might’ve been homesick or craving familiar food from home. But more peculiar was to see so many teenage girls in school uniforms coming in and out; many seemed to just come in to hang out with their friends. The staff didn’t seem to mind even though many didn’t really purchase anything from the restaurant itself. Later on, when we continued our walk around the area, we found out that there was an all-girls school nearby — that’s why there were so many of them coming to this restaurant.

The photo below was taken inside the McDonald’s while we rested from our long walk and enjoyed our cold drinks. You can see that it looked like a typical McDonald’s elsewhere, though the clientele of the restaurant seen here included mostly the local schoolgirls from the nearby area. 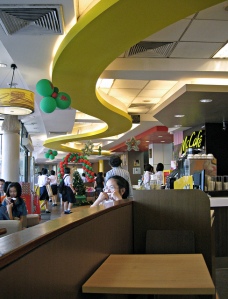