Sanam Luang or the Royal Field is a large area not far from the Grand Palace in downtown Bangkok, Thailand. This large field has a long history. Starting during the reign of King Rama I in the 1780s, the field was the site of important royal events and ceremonies, specifically royal cremations. Starting the early 20th century, the area was opened as a public park. Throughout the years, it was used as the site for festivals, public recreational activities, and even more recently the site for demonstration against the ruling government. At night, the area served as temporary shelter for homeless people, and there were also big flea market operating in the area.

During our night bike tour with the Grasshopper Adventures, we passed Sanam Luang area on our way back towards the Grasshopper Adventures office from our last stop at Wat Pho. It was interesting riding on the bike and seeing on the grass fields many people lying on mats. It was kind of peculiar — seemed like you had people relaxing at the park, but at night. Later on I found out that these folks were likely homeless; they work during the day elsewhere in the city, but they didn’t have a place to stay at night, so they stayed at Sanam Luang because it was lighted and there were other people, so it’s somewhat a ‘safe’ place to be. And then not far after passing that area, we found ourselves riding on sidewalk that kept narrowing because there were flea market vendors setting up their display on both sides of the sidewalk, and with many people walking around checking out the display, we had to be very careful riding our bike through there (at one point one of our bikers fell onto a vendor’s display mat; I wasn’t sure if there was any damage on the goods that the vendor was selling, but fortunately it didn’t cause any big problem). Now looking back I thought it’s interesting to compare that to the National Mall area in downtown Washington, DC. They’re kind of alike, though I don’t think we see as many homeless people in the National Mall area (you could see some of them at other public parks in DC), and there is no flea market there. As I googled around before writing this blog post, I saw a couple of articles about Sanam Luang saying that in early 2011 the area was closed and cleaned up, and now it’s illegal to stay overnight, stage demonstration, or sell stuff in the area. So it’s back to its previous beautiful state, but I guess it’s not as culturally interesting as it was in the last few decades.

I took the photo below from my bike as we rode through the flea market. There was a little ‘traffic jam’ and we were stuck for few minutes at this location, allowing me to take a quick snapshot capturing the atmosphere there that night. 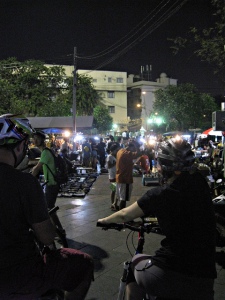