The Suvarnabhumi Airport is the main international airport in Bangkok, Thailand. The airport is pretty new; it was opened in 2006 as a replacement of the Don Mueang Airport. The airport today is one of the busiest airports in Asia, particularly as a gateway for tourism to Thailand and the nearby countries.

When we arrived at the Suvarnabhumi Airport, my first impression was very good. The international terminal was modern, clean, and comparable to some of the better airports I had visited. Though there were many Indonesians on the Thai Airways flight I took from Jakarta to Bangkok, once we got to the terminal, it felt like we were in a western country’s airport as there seemed to be a lot more westerners/Europeans than Asians. When we got to the immigration line, it was interesting to observe there were so many Eastern Europeans there — it seemed that Thailand has become a popular destination for tourists from Eastern Europe.

The airport is located quite a ways east of the downtown Bangkok area. If you know where you’re going and your destination is within walking distance from a Bangkok Skytrain/metro station, there is a train system conveniently linking the airport to the metro system. That’s probably the cheapest and actually the most predictable way to travel time wise. Alternatively you can hire a taxi like we did. You can find the taxi line easily, but if possible you want to have the address of your destination written down, preferably in Thai. Our taxi dispatcher was a bit confused looking at our hotel direction, but was able to determine roughly where we were going. Our taxi driver attempted to talk to us in broken English, and Kristi tried to start a conversation in the car, but the two of them ended up confusing each other, so they ended up stopping the conversation and just used hand gestures to communicate. Our hotel was located in the southwest side of Bangkok, so it was quite a long distance to get there. It was Sunday night, however, so the traffic was not bad at all.

On the day when we’re supposed to leave from Bangkok to continue our trip to Phnom Penh, Cambodia, our hotel manager generously offered to have the hotel’s car taking us to the airport instead of our original plan of taking the SkyTrain. It was around noon, so we got caught in downtown traffic for a bit. Fortunately we made it to the airport with plenty time to spare.

After checking in the luggage, we actually had some time to kill. We decided to go to a lower level of the airport building to look for food since we had not had lunch. There was one floor that was full of restaurants serving quite a diverse set of cuisines. Walking through there felt more like being in a shopping mall than being at an airport. We found one restaurant that seemed to have authentic Thai food, so we decided to go with that as our last meal in Bangkok.

The photo below was the dish that I ordered for lunch, pad thai with Mekong River prawns. I wanted to try pad thai during the visit, but our schedule was so packed the day before, so there was not a time to look for authentic or street-side pad thai. The one we had at the airport was surely more expensive than what you could get on the street, but I must say they did good job with the dish, and it had quite a nice presentation with a thin layer of egg used as a pouch (rather than typical shredded eggs on the dish). And the Mekong River prawns were quite good, fresh and sweet. 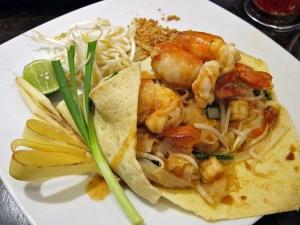