Phnom Penh is the capital city and the largest city by population in Cambodia. Situated on the banks of the Mekong River, Phnom Penh has been a capital city since the time when Cambodia was a French colony. During the 1920s, Phnom Penh was known as ‘the Pearl of Asia’ with its many French colonial buildings and boulevards. Similar to Bangkok, the city is also the site for the Royal Palace for the Kingdom of Cambodia. The Royal Palace complex includes the Silver Pagoda, a temple covered with silver tiles and now houses many precious Buddha statues that are the national treasure of the Kingdom.

The city went through a dark period in its history during the Vietnam War, as it was used as a base by the many sides involved in the conflict (Northern Vietnamese / the Viet Cong, then the South Vietnamese and its allies, and later the Khmer Rouge). The darkest part of its history was when it fell under the Khmer Rouge regime in 1975. Most of its population of 3 million people at that time was ‘evacuated’ out to the Cambodian country side by the Khmer Rouge, and one of the city’s public schools was turned into a prison called S-21 or Tuol Sleng. During the four years that the Khmer Rouge was in power, 21,000 people were imprisoned there, and only seven came out alive. Many were taken and killed in a place outside Phnom Penh called Choeung Ek (aka The Killing Fields).

When we were planning our trip in Southeast Asia, one of the places we wanted to visit was the Angkor Wat, which is located near Siem Reap. We were not thinking about going to Phnom Penh, until I started reading about the history of Cambodia. If the Angkor Wat represents the highest point in the history of the Khmer people, the Khmer Rouge genocide represents the lowest point. The reality is that both of these were parts of the history that made the people who they are and where they are now. So we thought visiting only Siem Reap and Angkor Wat would not give us a complete picture if we really wanted to appreciate this country and its people.

So we decided to spend our first couple of days in Cambodia in Phnom Penh, and we specifically planned to visit sites that would give us a good overview of Cambodian history: the Palace and the Silver Pagoda, the National Museum of History, the Tuol Sleng Genocide Museum, and the Choeung Ek Killing Fields. I had never been to any ‘dark tourism’ sites like concentration camps or even Holocaust Museums, so I didn’t have anything to compare this to as preparation. What I did know was that this one day in Phnom Penh could be the most emotionally exhausting day of our trip. But I thought it was essential to do it so we get better understanding about what the people of Cambodia had gone through in the last few decades.

The photo below was taken from the passenger seat of our hired car on the way from the Phnom Penh International Airport a little outside of the city to our hotel inside the city. The drive through the outskirt of Phnom Penh felt like driving through a provincial town in Indonesia. You could tell that new, modern influences had started to come in, but it was largely looking like what Bangkok or Jakarta would look like 20 years ago. 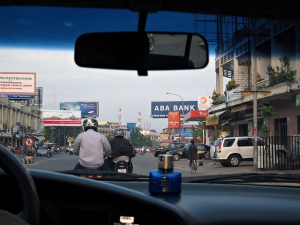