It’s interesting to note how traveling to a foreign country could make even a seasoned traveler feel out of his/her comfort zone. If you take away things that one normally relies on to be independent — guides, maps, and language (the ability to communicate), suddenly a normally confident traveler could lose his/her ability to navigate and would really feel helpless.

Such was how I felt when we were driving from the Phnom Penh International Airport to our hotel during our arrival in Phnom Penh, Cambodia. Fortunately we had arranged transportation through a tour company, who sent a driver and a car to pick us up at the airport and take us to our hotel. One little concern — the driver only spoke a little English. He had a board with my name and the tour company name written on it when we spotted him as we came out from the baggage claim area, and I just pointed to the name and pointed to myself to indicate that we’re the passengers he’s picking up. We followed him to his car, got our luggage loaded into the trunk, and off we went to our hotel. We tried to engage him in conversation in English, but he could barely understand what we’re saying though he tried to communicate with us with the little English he knew. We decided to not continue that so he didn’t feel bad for not being able to engage us in conversation.

As we drove towards downtown Phnom Penh, the surroundings were very different compared to what we saw when we were in Bangkok. In Bangkok, we rode the taxi from the airport on a big toll road that had signs in English and Thai, so we could roughly figure out where we’re going. In Phnom Penh, we were driving through somewhat urban area, and if there were signs at stores or commercial buildings, they were mostly in Khmer script, which I couldn’t recognize at all. I also didn’t have a map that could help me get the bearing of where we’re going.

That’s when I realized how helpless I felt at that moment — we’re hoping that our driver knew exactly where we’re supposed to go; we completely relied on him having the right instruction/information from the tour company. It’s interesting to compare that to my typical experience traveling in the United States. I used to travel very frequently for work to many cities in the US, but even in a new city that I had never visited before, the routine was roughly the same: find the sign at the airport for ground transportation, head towards the rental car company, pick up a car, and either use directions printed out from Google Map or use a GPS to navigate myself to my destination. When I didn’t have the normal things I usually relied on, suddenly I really felt out of my comfort zone as a traveler.

It all ended up well — our driver indeed took us to the right place. I’m so glad we had this pick up arranged; otherwise it might’ve made an interesting adventure getting from the airport to our hotel.

The photo below was taken during that drive, as we passed a local store that seemed to sell beauty products. Note the writing in Khmer scripts. I had a guidebook on my Kindle that provided translation from English to Khmer and vice versa, but since I’m not used to the script used in Khmer, those squiggly lines looked all the same to me and I couldn’t really determine what they might mean. 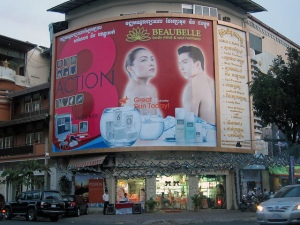