Malis is an upscale restaurant in Phnom Penh, Cambodia, that serves authentic Cambodian dishes. The restaurant’s Head Chef, Luu Meng is a celebrated and award winning chef in Cambodia. In the episode of Samantha Brown’s Asia where she visited Phnom Penh, there was a segment where she went to Malis and talked with Luu Meng about how he was from a family of chefs, but the creativity and tradition with the Khmer cuisine was suppressed during the Khmer Rouge era, and now he’s bringing those back through Malis and his other ventures.

We went to Malis on our first night in Phnom Penh. We found Malis on the list in my Lonely Planet Cambodia guidebook. It had pretty good note as having authentic Cambodian cuisine, and the location was not far from our hotel. The dinner was pretty good. We had a grilled chicken dish that tasted similar to an Indonesian dish, and a baked goby fish. The fish was fresh, and it was first salt crusted before being baked. The restaurant had a nice ambience and it’s a good place to dine for special occasion. The price was comparable to dinner for two in the United States — which means it was actually expensive for Cambodian standard. The majority of the patrons were foreigners. I wonder if Cambodians would actually go to this restaurant — I’m guessing they probably know cheaper alternatives that probably serve food as good as in this restaurant but it might not be as high profile or has the nice ambience.

The photo below was taken as we started digging through our meal. Here was Kristi and the big plates with the two dishes we ordered. Notice how big the fish was; it was brought out whole and our waitress fillet it at the table for us. 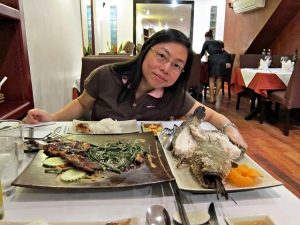