The Silver Pagoda is a temple within the Royal Palace complex in Phnom Penh, Cambodia. I first learned about the Silver Pagoda as it was one of the places in Cambodia included in the popular travel book ‘1,000 Places to See Before You Die’ by Patricia Schultz. The building was known as the Silver Pagoda because its floor was covered with more than 5,000 silver tiles (though except a small area that was exposed for visitors to see, most of the floor was covered with thick carpet to protect the silver tiles). The Silver Pagoda was no longer used for worship. Instead, it’s used to house some of the Cambodian’s national treasures, such as the gold Buddha statues of many sizes. Most notable was the ‘Emerald Buddha’ and a large, life-sized Buddha that was covered with more than 9,000 diamonds.

Though the purpose was probably similar to Wat Phra Kaeo within the complex of the Grand Palace in Bangkok, Thailand, one notable difference between my visits to these two temples was the current function of the temple. Wat Phra Kaeo is still actively being used for worship, with the Emerald Buddha statue housed there. The Silver Pagoda on the other hand is now used as museum; I don’t think it’s used for worship anymore. For reading about it what’s remarkable was the fact that the Khmer Rouge spared the temple and its content, even though they pretty much ransacked everything else (you could tell how bad it was left with the Ramaketi frescoes on the wall outside the temple that is currently still being restored — it’s a long ways to go before it could be to the level of the frescoes at the Grand Palace in Bangkok. From what I read, it seemed that the Khmer Rouge left the Silver Pagoda alone in a way as a PR statement to the outside world that they still valued some of the Khmer heritage. Regardless, I think we’re fortunate that these treasures remained preserved that now the world can get a glimpse of the richness of the Khmer culture and history.

The photo below was taken outside the Silver Pagoda. It was a wonderful, cloudy morning. Not too hot and the sunlight was not harsh; perfect for photography. 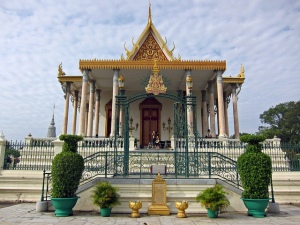