I wrote a post last month about the Thai King. Cambodia is also a Kingdom, and it has a King as well. The King’s role is mostly ceremonial, but similar to the Thai people, the Cambodians also revere their King. Their current King is King Norodom Sihamoni, who became King in 2004 replacing his father King Father Norodom Sihanouk who abdicated his Throne due to health reasons. If King Bhumibol Adulyadej of Thailand is the longest reigning monarch in the world, King Father Norodom Sihanouk held the world record for the number of positions that he held during his lifetime. The Guinness Book of World Records identifies him as the politician who has served the world’s greatest variety of political offices. These included two terms as King, two as Sovereign Prince, one as president, two as prime minister, and one as Cambodia’s non-titled head of state, as well as numerous positions as leader of various governments-in-exile.

When Kristi and I visited the Royal Palace in Phnom Penh, we saw an exhibit at the museum dedicated to the life of the King Father Norodom Sihanouk. He was born in 1922 (so he’s 90 years old this year) and first became King in 1941. At the exhibit, there was a photo of him with the first Indonesian President, Soekarno, not long after Indonesia gained its independence. That’s how long he’s been around. People in Cambodia revered him, as evident to him being restored to his position as the King of Cambodia in 1993 after years of being in exile during the Khmer Rouge era.

The photo below was taken when we visited the Banteay Srei temple near Siem Reap. It was the photos of the current King Norodom Sihamoni on the left, the King Father Norodom Sihanouk in the middle, and Queen Monique on the right. 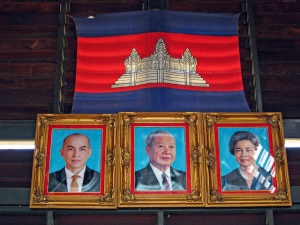