After visiting the Tuol Sleng Genocide Museum in Phnom Penh, Cambodia, our next destination was Choeung Ek, the Killing Field. It’s been pretty intense experience learning about the Khmer Rouge atrocities, and before continuing to the Killing Fields, a lunch break was definitely a good idea. Our driver asked us where we wanted to go for lunch. We told him that we didn’t have any particular restaurant in mind, and asked him for suggestion for a good, local Cambodian restaurant — a place that he would go himself to eat. He suggested a place near our next destination, Choeung Ek Killing Fields, where he liked to go when he took guests there.

The drive to Choeung Ek area took about 45 minutes. The restaurant was located only about five minutes before we reached Choeung Ek. Our driver said that this restaurant was a favorite of his and other drivers. They would go here for lunch break while waiting for their passengers visiting the nearby Choeung Ek.

When we got to the restaurant, we were the only customers there. There were several items on the menu, and they were already prepared and laid out on a long serving table. Our driver and the lady serving at the restaurant went over each of the dishes with us. Since the restaurant lady didn’t speak English, we asked our driver to do the ordering for us. We sat down at one of the few tables at the restaurant, and the lady served us a sampler of what they had: tom yum soup, deep fried fish, duck curry, and pickled sour mustard with pork. I initially felt a bit apprehensive, but after tasting each of the dishes and found out that they tasted similar to dishes I had in Indonesia, it was like eating homemade dishes at someone’s house.

While eating lunch, we also had a chance to chat with our driver. We found out that he grew up and had lived in Phnom Penh all his life, and he’s seen the city changing a lot in the last few years as Cambodia opened up to foreign visitors again. I asked him about his family, and learned that he had four children, all under the age of ten. He smiled when talking about his children — just what you would expect from any proud and loving parent. One subject I didn’t ask was about the impact of Khmer Rouge on him personally; I didn’t know if that would be something I should ask.

Next to our table, we saw a group of young Cambodians in their 20s, mostly in light blue long-sleeve shirts coming and having lunch. I was curious, since I noticed a lot of people in Phnom Penh wearing similar outfit. I asked our driver about that, and he said these folks were likely office workers who were taking their lunch break. Later on I learned that many employers in Cambodia follow similar dress code of requiring their employees to wear the light blue uniform so that became the equalizer and avoid any socio-economic issues that might come when the have’s and have not’s wear different outfit. That reminded me to similar policy we had in Indonesia for school students where we had to wear standard uniform regardless which school we went to. That worked pretty well in Indonesia, and since there was quite a wide adoption in Cambodia, that seemed to work there too.

The photo below was taken before we dug into our lunch. You could see us with the table full of food to share and enjoy, and in the background is the long table with the big pots where the dishes for the day were already prepared ahead of time and ready to serve to hungry guests like us. 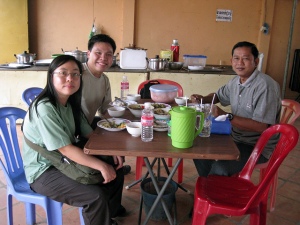