After spending few minutes at the memorial stupa at the Choeung Ek Genocidal Center outside Phnom Penh, Cambodia, we followed our guide Mr. Chanteng on a walking tour around the area. Without knowing the story, all you would see around the memorial stupa was what looked like an undeveloped plot of land, covered with grassy areas and some trees around. In the distance, you could also see a river flowing. If you look closer, you would notice that the grassy areas were not flat, but seemed to mounds created after large holes were dug on the ground. That would be the first clue for the horrific events that happened at this place.

Before the Khmer Rouge came into power, the Choeung Ek area was a small village about 15 km southwest of the city of Phnom Penh. The land that became the Killing Field was an old Chinese cemetery near a river. The Khmer Rouge regime decided to use this area as the place where they would exterminate the prisoners from Tuol Sleng because it would allow them to do it in secret and in a place where they could hide the evidence. Most Cambodians were of Chinese descendants, and Chinese typically would bury their dead in a family cemetery. So by burying the killed prisoners at the cemetery ground, no one would find out about the atrocities that took place. Mr. Chanteng showed us some remains of Chinese grave stones that gave us an idea of what it was like there before the place became the Killing Field.

As we walked through the dirt paths, Mr. Chanteng pointed to spots on the ground where we could see what looked like pieces of clothing, and as we looked closer, we could also notice bone and teeth fragments. These were from remains from victims in the mass graves that had not been exhumed yet. During the rainy seasons, heavy rains and floods in the area would bring some of these remains up to the ground surface. In the first few years after the Killing Field was discovered, the river nearby would flood the area during the rainy season. People who lived nearby said that during the first few years, you could smell very bad odor of decaying corpses in the air around the area. That’s just hard to imagine.. Since then, a dam was built near the river to prevent flooding from happening, but the heavy rains would still bring some of these remains up to the surface. It’s yet another surreal experience thinking that we were literally walking among the deads there.

There were several distinct spots at Choeung Ek that were marked to give the visitors idea of what happened there. Most of the mass graves were not marked, except some that had some significance due to what’s found in the grave. One grave was marked as the one with the largest number of victims found, 450 of them. Another one was marked because the victims found in the grave did not have heads, suggesting that they were beheaded before buried there. Another mass grave had only women and children victims, and some of the victims did not have clothes on.

One sign marked the spot where the trucks carrying the prisoners from Tuol Sleng would stop and had the prisoners unloaded. The prisoners were then taken to the place where they would be executed, and some would have to first dig their own mass grave before they were executed. There was a sign marking the place where a shed once stood. It was used to store DDT and some other chemicals. The chemicals were used after the execution had taken place; by pouring the chemicals on the bodies in a mass grave, the smell of decomposing corpse could be masked, and if there were any of the prisoners who were still alive, the chemicals would certainly kill them.

Before we finished our walking tour, I asked Mr. Chanteng about how he was personally impacted by the Khmer Rouge regime. He told us story about what his family went through in the late 1970s. Like many other Cambodians, his family had to leave their village to move to a different part of Cambodia to work on rice fields. At that time, he was only three years old, too young to move, so he was left with his old grandparents in his village as his parents and his two older sisters left for another part of the country. Sometime during the move, his parents survived, but unfortunately his two older sisters did not make it. They died of starvation.

I asked him how he and others in Cambodia could move on with their lives after the horrific past. He said for him, he wanted to make sure people learned about the Khmer Rouge atrocities so it would not happen again in the future. That’s why he became a guide at Choeung Ek – a job he had been doing for more than ten years. He also said that for many Cambodians, it was such a hurtful past that they chose to just not talk about it. Thirty years later, the majority of Cambodians (70-80 percent of the population) were born after the Khmer Rouge time, so they did not experience the horror first hand. They knew that it happened and impacted their parents, but many chose to not talk about it because it’s just too sad of history to discuss. It’s a very difficult situation that these Cambodians had to endure to move on with their lives. We could just hope that whichever path they took to deal with it, the horror of Khmer Rouge atrocities would never happen again.

The photo below was a black-and-white photo we saw at Tuol Sleng Museum. It was a photo taken when the mass graves were uncovered at Choeung Ek after the Khmer Rouge regime’s reign was over. 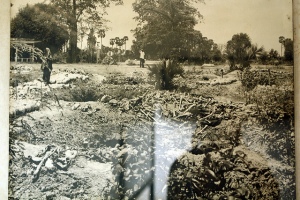