Siem Reap is the capital city of the Siem Reap Province in Cambodia. Its name means ‘the defeat of Siam,’ commemorating the victory of the Khmer people over the invading Siam (Thai) people in the 1500s. Today the city is fast growing because of the booming tourism / hospitality business. The city is located very close to the site of the ancient city of Angkor, which was the seat of the Khmer Empire that ruled a large part of Southeast Asia more than 1,000 years ago. Today tourists come to Siem Reap and use it as the base to explore the area that is full of temple ruins, including the famous Angkor Wat. Angkor Wat, which is still in use for worship by the locals, is the world’s largest religious monument.

We came to Siem Reap after our visit to the Cambodian capital Phnom Penh. Our stay in Siem Reap was arranged through a local tour company called Derleng Tours. They suggested a typical itinerary for a three day, two night visit to Siem Reap, which we then customized to what we would like to see and do. During the duration of our stay, we had a private tour guide and driver with air-conditioned van that accompanied us to places around Siem Reap that we wanted to visit.

The photo below was taken in downtown Siem Reap on a street called the Pub Street. This place is a popular hangout place for foreign visitors. The particular place on the photo is a pub/restaurant called The Red Piano. It became famous because it was visited by Hollywood actress Angelina Jolie when she came to the area to film Tomb Raider. 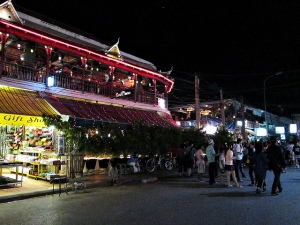