When visiting Angkor Wat, most foreign visitors come to see a magnificent monument / structure and the intricate details of the bas reliefs in the galleries of the main temple structure. One thing to note, however, is that Angkor Wat is still actively being used as a place of worship by the Cambodians. As such, I think it is important to have the proper respect and reference when coming to visit the place.

As we walked around the main temple building, we saw tourist groups accompanied by their guides visiting the galleries and looking at the details. When we reach certain parts inside the temple, however, we noticed that there were not as many foreign tourists there, but instead you see local Cambodians coming and setting up mats in front of statues of Buddha, and brought with them offerings to use for worship. In one of the guidebooks I read, it mentioned that during the Lunar New Year time, this was even more pronounced as the locals would come in numbers to worship, and this might be the time for tourists to yield to the locals and instead observe the use of the temple as it is intended to be rather than simply as a historic monument.

I think it’s also important that before coming to visit places like Angkor Wat that has special meanings to the locals to be reverent and pay the due respect to the traditions and culture. Often times you see visitors who come and think that because they’re the guests who paid their way to come and visit, they should be treated like royalty and they can do whatever they want. That’s very insensitive, and it’s what often times give certain group of people bad stereotypes from the locals.

The following photo was taken from a little distance when I saw the locals in the process of doing their worship ceremony. We watched silently from a bit of distance to ensure that our presence did not cause any distraction or interruption to the worship ceremony that was in progress. 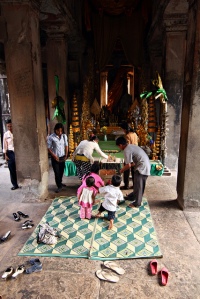