When visiting a foreign country, one thing to consider is the issue of personal safety. Prior to our trip to Cambodia, I did some readings on the safety issue for visitors there, and tried to be knowledgeable and prepared. One important thing to get prior to an international travel like this is a travel insurance, which for a reasonable price could cover potential cost in the event of emergencies (like health issues, theft, etc.). I think regardless where you go, that should be something you should have for your peace of mind.

Specifically on Cambodia, some concerns/risks typically mentioned are: crime (especially in big cities like Phnom Penh), malaria (in rural areas), and landmines (leftover from the war time, but still present especially in rural areas). For us, we were not worried about malaria as we’re only visiting for a few days, and we’re mostly in Phnom Penh and Siem Reap. The landmines risk was not a concern either as we’re traveling with tour guide and on well-traveled path (not going to the jungle on our own). As for crime, I wasn’t too worried initially, but I did have quite expensive photographic equipment in my backpack that might be of a risk for theft. One of the guidebooks I read even said to be careful carrying expensive camera in Phnom Penh as there had been reports of people getting their camera snatched by people on motorbike while walking on the sidewalk.

I asked our tour guide Vanna about that, whether we need to worry about theft. Vanna said that he thought Siem Reap area in general was a safe place to be; we need not worry about getting mugged or anything like that. He said generally when things were lost, people were pretty honest and items were found or returned, though if you have cash in a wallet, for example, those might not be recoverable.

I didn’t think much about this, until after our trip to Banteay Srei. After we visited the temple, we stopped near the public restroom area as Kristi needed to use the restroom. Vanna and I waited for her outside, and we had pretty good discussions about some things. After Kristi was done, we went to our van to continue our day trip. We had been driving away for about 15 minutes or so when I realized that I didn’t have my DSLR with me. I looked around my seat in the van, and couldn’t locate it. So we immediately took a U turn and rushed back to Banteay Srei. The restroom area was the last place I remembered having the camera with me.

When we reached Banteay Srei, Vanna and I ran to the restroom area, and when we got there we saw a local Cambodian family holding my camera, and trying to figure out who the owner of it was. I went to them and use hand gestures to told them that it’s mine, and then showed them a couple of photos on the camera that had my photo on it to prove that it was mine. I thanked them for keeping the camera, and we left Banteay Srei to continue our trip.

Vanna said that I was very fortunate that we got back in time to retrieve the camera, and that there were these honest people there who ‘kept’ the camera until the time we came and retrieved it almost half an hour after we left there. Afterwards, I thought about the whole situation, and I wondered how I would’ve felt had I lost my camera. Though obviously there would be the monetary lost — the lens on the camera was more expensive than everything else I carried during that trip combined — I think what I would’ve lost even more were the shots I had in the memory card that couldn’t be replaced. So I would agree with Vanna — I was very fortunate — and it also taught me some lessons: 1) always back up your memory cards, 2) you should have travel insurance in case the unfortunate event happened to you, 3) if you’re not careful with your belongings, you can lose it, no matter where you are, and 4) there are honest people everywhere and don’t have stereotype or assumption that because you’re going to a developing country, people are after your expensive belongings.

The photo below was taken that morning at Banteay Srei as we entered the temple. The crowd size was still pretty reasonable in the morning — there were more people coming later in the day. 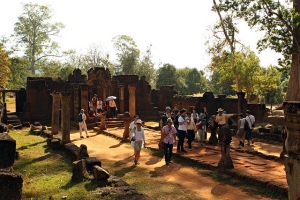