Angkor Thom is a walled city complex in the Angkor Archaeological Park north of Siem Reap, Cambodia. The city was built by King Jayawarman VII in the 12th century, and the city was the capital of the Khmer Empire for several hundred years until it was abandoned sometime before year 1609. It is believed to have sustained a population of 80,000 – 150,000 people. The complex is about 9 km2, shaped in a square (3 km x 3 km), with five gates (one in the north, west, and south sides, and two in the east side). The surrounding wall is about 8 m high and flanked by a moat. Inside the complex, today visitors can find ruins of several temples and the royal palace and terrace. At the center of the city is the temple of Bayon, famous for its towers with their stone faces.

Our first encounter with Angkor Thom was during the drive from Angkor Wat to Banteay Srei. The modern highway actually goes through Angkor Thom. We entered through the South Gate, drove to the center past Bayon, and continued through one of the East Gates knows as the Victory Gate. We came back again and stopped at several parts of Angkor Thom on the way back after we visited Banteay Srei and Ta Prohm earlier in the day.

The photo below was taken as we drove throught the East Gate known as the Victory Lane. It was the entrance where the victorious Khmer army would march into the city after winning battles against their neighboring enemies (like the Chams). As we drove through the Victory Lane, I couldn’t help trying to imagine what it would like with thousands of people lining the entrance welcoming their victorious troops. 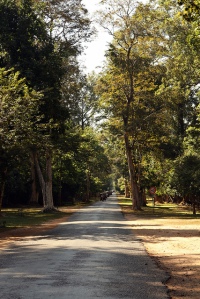