The Elephant Terrace is an area inside the walled city of Angkor Thom in the Angkor Archaeological Park north of Siem Reap, Cambodia. The terrace is a raised platform at the end of the Victory Lane (coming into the city through the Victory Gate in the east side). This was where King Jayawarman VII would be standing to view his victorious army marching in through the gate returning from battle. It is called the Elephant Terrace for the carvings of elephant heads on its east face. Today what remains is just the ruins of the platform, but you can still go up there and stand in the middle of the platform and see the panoramic view of the surrounding open field and the present highway going through the Victory Lane.

We stopped at the Elephant Terrace area as the next stop in Angkor Thom after the Victory Gate. Our tour guide Vanna gave an overview of the area and some of the carvings that we saw. What I remember most however was standing in the middle of the Elephant Terrace, looking around, and imagined in my head what it might’ve been standing there near the King welcoming the troops marching into the city after a victorious campaign, and having the open field in front of the terrace filled with residents of the city. That must’ve been quite a sight…

We also walked around a little bit to a nearby area called the Terrace of the Leper King (named for a sculpture found nearby that had moss and discoloration on it, looking like someone with leprosy). By then honestly I was quite tired after walking around under the heat for a while, and I was ready to take a break. What’s interesting I remembered was the walking path nearby to continue to other sights in Angkor Thom went through a cluster of stores and restaurants — very strategically located to cater tourists needing a break from walking around in the area. We ended up continuing our walk towards where our van was parked, but we saw many other tourists stopping by there to take a break. So that was a successful strategy from the tourism planner I suppose.

The photo below was taken from the Elephant Terrace. I used my wide angle lens to capture the expanse of the view. You can see the Victory Lane right in front in the middle. 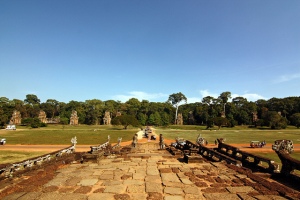 2 thoughts on “The Elephant Terrace”