Psar Chaa or the Old Market is a market in downtown Siem Reap, Cambodia. The market is quite popular with the tourists in Siem Reap as it is a traditional Southeast Asian market closest to the touristy area where you can experience going to a market just like the locals do. For foreigners who have never been to such marketplace, it could be quite an interesting experience and perhaps even shocking to the senses, as you would see, hear, smell, and if you like, taste things from the market that is quite different from the more sanitized/sterile environment found in modern supermarkets/grocery stores. At Psar Chaa you can also find souvenirs, and the experience of shopping for those and haggling for good price in itself is an interesting activity to do for some tourists.

Kristi and I had been to similar markets in Indonesia, so this was not necessarily in our plan to do, especially since we already found our souvenirs from Cambodia early on during the day. After our full day of sightseeing at the Angkor Archaeological Park, we had the evening free. It was also New Year’s Eve, so we thought we should at least explore the downtown area of Siem Reap for dinner and to see if there were any activities planned out to welcome the New Year. Our hotel, The Kool Hotel, was located about 15-minute drive from downtown, but they had a shuttle van going down there periodically until around 10 pm. We thought we would take the shuttle on the way there, and depending on the time we’re ready to head back to the hotel, we would either take the shuttle back if it’s still available or take a tuk-tuk.

The hotel shuttle drop point was near Psar Chaa, and to go to the main street where the restaurants are located, we would have to walk pass the street where Psar Chaa was located. It was already around 7:30 pm by then, and most of the market stalls were already closed, but there were still some stores that were open and we could get a glimpse of what could be found there.

The photo below was taken as we walked through the street near Psar Chaa. We saw this store that had sausage links and dried seafood hanging. It looked like this lady was looking at the store’s display, though I doubt she would get something from here to take home as souvenir. 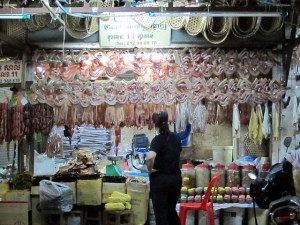