When visiting Cambodia, one thing you will notice on the street is the popularity of a Toyota Camry. It seems that if you go anywhere, if you go on a sedan, it’s likely to be a Toyota Camry. Not really sure how that came about, but these days a lot of used Camry, mostly five years old or older, are imported from other countries like the United States and sold in the used car market in Cambodia.

During our visit in Cambodia, when we were in Phnom Penh we had two separate drivers who took us around on the first couple of days there. Both drove Camrys. When we were in Siem Reap, we went around in passenger vans, so those were not Camrys. But we still saw many of them around also in Siem Reap. On the New Year’s Eve night, while waiting for our hotel shuttle to arrive, Kristi and I looked around for the cars passing by to see if indeed Camry was the most popular car in Cambodia, and sure enough, I think more than half of the cars we saw that were not buses or passenger vans were all Camrys. We also noticed another model that was pretty common, Lexus RX300. Knowing that Lexus is made by Toyota mostly for the US market, my guess is that these cars were originally used in the US, but then in its later part of life it was sold and brought into Cambodia.

I asked our tour guide Vanna about this. He said, yes, Camry definitely is the car of choice in Cambodia. He said there are three brand names that are household names in Cambodia: Nokia, Honda, and Toyota. Most people own a cellular phone, and while you might find Blackberrys and Apple iPhones occassionally, the most popular brand of phones was undoubtedly Nokia. Not many people can afford to buy cars, so for personal transportation it’s more common that people would buy a scooter, and the most popular brand for scooters in Cambodia was Honda. And for those who have enough money to purchase a car, the popular choice was a Toyota Camry. Vanna said one day he wished he would have enough money to get one.

I looked for a photo among the collection I took during our trip in Cambodia for one that best used for this post. Below is one that didn’t make it to my photojournal album for the trip, but I think it’s a good example of what you see in Cambodia. This was taken from the back seat of our car (a Camry) during a drive in Phnom Penh after we visited the Killing Fields. The scene that caught my attention was the motorcycle on the left carrying bags full of lime, a key ingredient in Khmer cuisine. But you can also see on this photo in the background on the opposite side of the street several other people in scooters (quite a common sight in Southeast Asian countries), and on the right, another car right in front of us, and you guessed it, it’s a Toyota Camry. 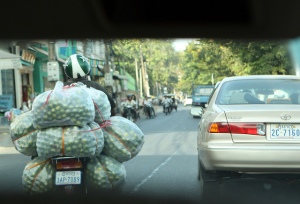