Ho Chi Minh was born Ngunyen Sinh Cung. He grew up going to a French school in Vietnam, then he got a job as a cook’s helper on a ship that took him to the United States. He lived for a few years in New York City and Boston area, working various jobs including as a baker at a hotel. Then he made his way to England, where supposedly he trained as a pastry chef to the famous chef Auguste Escoffier. After that, he lived in France where he started learning about communism, and then he moved on to Moscow, Russia, and Canton (present day Guangzhou), China. In China he was involved in the political movement, but he also met a Chinese woman and got married there. Then when the anti-communism coup happened in China, he went into an exile in Moscow, then made it back again to Asia by the way of Paris, Brussels, Berlin, Switzerland, and Italy. He stayed in Thailand for some time, then moved to India and back to China. The British government arrested him in Hong Kong, then quietly released him, and he ended up in Milan, Italy, working at a restaurant there before returning back to China. Then as an adviser to the Chinese communist forces, he also led a Vietnamese independence movement that led to the proclamation of independence and the establishment of the Democratic Republic of Vietnam in 1945. Later on he also led the North Vietnam to fight against the South Vietnam and eventually resulting in the Vietnam War. While the war was still going on, in 1969 Ho Chi Minh died from heart failure, but his followers continued on the fight, and he was still revered as their leader, and his body was embalmed and until today can be found on display at the Mausoleum in Hanoi. After the war, the city of Saigon in South Vietnam was renamed Ho Chi Minh City in his honor.

It’s pretty interesting to observe that the majority of visitors to the Ho Chi Minh complex when we went there were Vietnamese. I didn’t ask what these folks thought of Uncle Ho, as he affectionately was known and respected in the Vietnamese culture, but it’s clear that the government really put him on pedestal as their national hero (though interestingly Ho Chi Minh himself when he was alive supposedly was quite a humble man and did not seek the honor himself).

On the way out of the complex, however, we saw a souvenir stall selling t-shirts for tourists. You could see from the photo below that they had the communist flag and even a caricature figure of Ho Chi Minh on the t-shirts. I’m guessing only western tourists would get these (I couldn’t see a Vietnamese wearing one of these and not feeling irreverent or uncomfortable among their countrymen), but I thought it’s interesting that in the end it seems that even in this communist country at such an important landmark you could see the idea of capitalism was present. 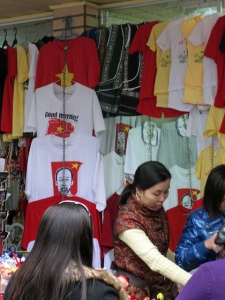