As we visited places in Thailand, Cambodia, and Vietnam, one interesting observation to make was the difference between the mix of local and foreign tourists at the popular tourist destinations, and the kind of activities they do there. I also wondered how much of domestic tourism is related to the economic condition or progress in the country — my guess is that when the country is more developed, more likely you have domestic tourists as they have more financial means to support the activities.

When we were in Hanoi, Vietnam, Kristi and I particularly noticed the domestic tourism both at the Ho Chi Minh Complex and at the Temple of Literature. At the Ho Chi Minh Complex, it was interesting to see that the majority of the visitors were Vietnamese. I think part of it could be that the local message (propaganda) of honoring Uncle Ho really worked, but perhaps it’s also because the protocol to visit the complex may be a bit intimidating for foreigners.

At the Temple of Literature, we also saw many domestic tourists. At this place, we did see significant presence of foreign tourists as well, but you could clearly see a better parity between foreign and local tourists. They pretty much blended in, though there were activities that specifically were done only by the locals, such as burning incense near the Confucius statue, or touching the head of the giant stone turtle at the Stelae of Doctors for good luck. It’s very different compared to visiting Angkor Wat in Siem Reap, Cambodia, for example, where you would see mostly foreign tourists, and the locals we saw were mostly those providing services to the foreign tourists (tour guides, drivers, souvenir sellers, restauranteurs, etc.). It was somewhat similar to seeing the Thais visiting the Royal Palace and Wat Phra Kaeo; many of them went there specifically to worship as the Temple was considered as one of the most sacred places in Thailand.

The photo below was taken in the inner courtyard of the Temple of Literature. Here you can see some domestic tourists burning incense near the statue of Confucius as a sign of reverence. 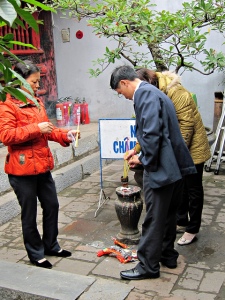