One interesting aspect in travel experience is the people that you meet during the trip — sometimes the circumstance where you meet them were so unusual that it becomes a memorable one. During the Southeast Asia trip, Kristi and I had such encounters with a couple of travelers.

When we were about to leave Bangkok, Thailand, we had to wait in a line for security check at the Suvarnabhumi Airport for a few minutes. There were only us and a young couple in front of us waiting in line. As we waited, I figured out that the couple were Americans (from looking at the cover of the passport in their hands) and that they were going in the same flight as ours, an AirAsia flight to Phnom Penh (also easily spotted since AirAsia had the boarding pass that looked like sales receipt, and the flight number written on theirs was the same as ours). I didn’t think much about this, as we were among the passengers in a plane full of foreigners going to the capital of Cambodia.

Fast forward five days later. Since then, we spent few more days in Cambodia in Phnom Penh and Siem Reap before continuing our trip to Hanoi, Vietnam. In Hanoi, we visited the Temple of Literature, one of the popular destinations in the city for foreign tourists. As we reached the entrance and waited to enter the temple complex, guess who we saw also waiting at the entrance… the American couple we saw in Bangkok few days before. We didn’t talk with them, but both Kristi and I recognized the couple, and they seemed to recognize us as well. Again, we continued on with our sightseeing in the temple and didn’t think much of it.

After finishing with the visit to the temple, we decided to walk to Quan An Ngon for lunch. It was about 20 minute-walk or so; it wasn’t close, but still walkable. We reached the restaurant, waited for few minutes to be seated, and then sat at one of the tables in the middle of the courtyard. After spending few minutes looking at the extensive menu to pick our entrees for the meal, I looked around to take in the unique atmosphere at the restaurant. When I looked around to a nearby table, guess whom I saw… the same American couple again. That’s starting to get weird; hopefully they didn’t think that we were stalking them… Later on Kristi walked around to check out the food stalls on the way to the restroom, and she said she walk passed the couple. She said the wife looked at her, didn’t say anything, but clearly recognizing Kristi from the earlier encounters both in Bangkok and at the Temple of Literature. Kristi and I later joked that if we ended up meeting this couple again elsewhere during our trip, we have to at least say hi to them.

Here’s the photo of the couple, taken at Quan An Ngon. I sneaked this shot as they were looking at the menu to order. 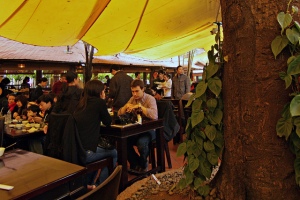