After a full day of sightseeing in Hanoi, Vietnam, we were ready to continue on with the next leg of adventure during our Southeast Asia trip. So far we’ve traveled by air, land (car, light rail train, bicycle, tuk-tuk, minivan), and water (river boats). The next leg of the trip is to travel by overnight train, and continued with a minivan. That was the most convenient way of getting to our next destination, Sapa. But before we embarked on this adventure, we had to first get in contact with a gentleman in Hanoi who made the arrangements for our trip to Sapa. That in itself was an interesting experience.

After deciding that Sapa is one of our destinations in Vietnam, we started planning out the trip up there. The easiest, most convenient way of planning this would be to get a travel agency to arrange the trip for you. They’ll take care of the transportation and lodging arrangements. We decided to be a little more adventurous and plan the travel a little bit independently. I used TripAdvisor to look at various boutique hotels in Sapa to consider as places to stay. We ended up selecting a place called Sapa Rooms. When we looked at booking the room to stay there, they mentioned that they could also help arrange the trip from Hanoi to Sapa and back. The only route to go to Sapa (north of Hanoi, near the border with China) was to take train from Hanoi to Lao Cai, then take a minivan or bus from Lao Cai to Sapa. The train typically leaves Hanoi in the evening and arriving at Lao Cai in early morning. Then it’s about one hour drive up the mountains to Sapa. We thought we were adventurous, but trying to do all of these without anything pre-arranged would be a bit too much adventure to take. And trying to book the train ticket on our own was quite a confusing process. So we decided to just book our travel through Sapa Rooms as well.

It turned out that the Sapa Rooms owner, an Australian gentleman, also had a business in Hanoi. Few months before our trip (when we were in the planning stage), he had a place in Hanoi that was meant to be a quick rest stop for independent travelers to freshen up before they head to Sapa. But just shortly before our trip, that place was closed, and instead he opened up a new boutique hotel in the heart of Old Quarter Hanoi called 6 on Sixteen (they had only six rooms, and it’s on 16 Bao Khanh Street). This was the place that we were instructed to go to by a certain time to meet the gentleman named Mr. Viet who would get us to the train station, provide us with our train tickets, and ensure that we get on the right train to Lao Cai. I read many horror stories about people getting scammed at the Hanoi Train Station, so I thought even though this arrangement sounded a bit outside my comfort zone, it seemed to be safer than trying to do it myself.

We arrived at the Six on Sixteen around 6 pm, just like what we were instructed. As we got there, I told the hotel staff that we were there to see Mr. Viet before our trip to Sapa. The hotel staff mentioned that Mr. Viet will usually come around 7 pm, and in the mean time we were welcomed to hang out at their restaurant/lounge.

The ground floor of the small boutique hotel was pretty much a long, narrow room with wooden tables and benches and a bunch of plush pillows to sit on around a lounge table. Since we knew we’re going to travel overnight on the train, we thought it would be better if we had something to eat before we leave. I thought this was quite a smart arrangement by the hotel’s proprietors; get the travelers to come a little early before their trip, and offer them some food and refreshments before their journey. We ordered a couple of Vietnamese appetizers and some mixed fruit drinks (which we came to love during the next couple of days staying at Sapa Rooms/6 on Sixteen).

Around 7:30 pm, finally Mr. Viet arrived (after I got nervous and checking with the 6 on Sixteen staff several times). After quickly greeting us, he stopped a taxi cab, told the driver that we’re going to the Hanoi train station, and told us to get on the taxi and he would meet us at the train station as he rode his motorcycle separately. The memorable trip to Sapa then started…

The photo below was taken at the 6 on Sixteen lounge area while we were waiting for Mr. Viet to arrive. You can see the dimly lit area, and the long and narrow place. 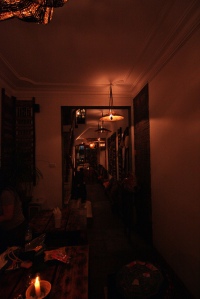