As we went down through the muddy and steep path towards the villages outside Sapa, Vietnam, our guide May led the way and stopped frequently to let the group catch up with her and ensure we’re okay during the hike down. We’re not used to going through this path, so it took us a bit longer than her or the local ladies that walked with us.

Dave and Anna were walking in front of me. Dave went first to follow the foot steps of May, then he stopped and helped his wife Anna to walk through the same steps. May and the local ladies observed this, and they seemed to be very impressed with what Dave did. At one point, May said, ‘Dave, you’re a great husband. Vietnamese men don’t do that to their wives.’

I thought that was interesting to notice how different cultures treat the interaction between man and woman differently. In the western culture, there is the idea of courtesy and being a gentleman where as a good manner men are supposed to let women to go first, open the door for them, or help them going through difficult path like what Dave did. It’s especially emphasized when you’re with someone you care about (your significant other, family, friends, etc.) or simply just as an etiquette. I think one should extend this behavior to beyond the people you care about, and treat others — even strangers — with respect as well. It’s a breath of fresh air to see that kind of behavior in a culture that sadly is going towards a more selfish one, and where people do such acts of courtesy as something done potentially to getting something back in return in mind.

In Vietnam, similar to some other Asian cultures, the idea of courtesy is there, but typically it’s towards the elderly or those with higher rank. It’s not so much taught or practiced when you have someone else at the same age. When Kristi and I were in Hanoi, we actually experienced an example of ‘no courtesy.’ We were waiting in line to get tickets to enter the Ho Chi Minh Museum, where a couple of times we had others (Vietnamese) cut in front of us even though they saw we were waiting in line. One of them even looked at us and smiled before leaving. With regards to man and woman, typically the man is the head of the house and the woman is expected to follow, obey, and serve. It sounds bad, but I’m sure there are many men who love their wives and would do anything for them. But it’s just not a familiar idea I suppose to have the men yielding to the women or helping them in day-to-day activities.

Having lived in both cultures, in the end I think again the idea of being courteous and respecting others go beyond just towards the women or towards the people we care or respect. I think in daily lives, it’s always important to respect others, regardless of gender, age, national origin, titles, or any other cultural division among people. And this goes to any situation and anywhere you go.

I captured the moment below as Dave was helping Anna to step through the muddy path going down to the valley. May was trotting through the path like a ‘mountain goat’ in the front, and on the side you can see a couple of the local ladies watching Dave helping Anna. 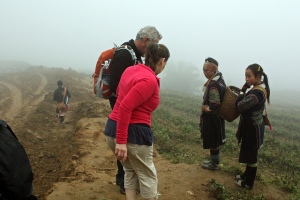