We finally reached the village of Lao Chai as we hiked down to the valley near Sapa, Vietnam. We walked on the dirt road that cut through the village. On the side of the road, we saw more terraced rice fields and some homes. We also saw something that’s probably common to see in the villages in Southeast Asian countries, but not in the United States or other western countries, animals roaming around near the homes: dogs, chickens, and pigs. Seeing dogs roaming around as pets are not unusual. But seeing chickens and pigs, those are a little different. They pretty much roamed around freely, not just in an enclosed, grassy areas, but really just anywhere around the homes, and some even roamed outside to the dirt road.

The first thought that came to my mind was that this gave a new meaning to ‘free range.’ In the United States, there were concerns about how farm animals are treated. Many farms were focusing on increasing the production of meats and poultry that the way the animals were grown some considered as ‘inhumane’ or cruel. The animals were caged and lived unnaturally. So the industry then tried to improve this by introducing the idea of having ‘organic’ and ‘free range’ animals. The animals were fed more natural foods (without chemicals or growth hormones) and instead of caged, they were free to roam on the field. The result was supposedly not only more humane treatment for the animals, but also healthier and better tasting meats.

I thought of that concept in comparison to how locals grow animals in Vietnam. The locals in the villages have some pig and chicken, but they’re not necessarily farmed for high volume production. According our guide May, the locals eat meat, but that’s considered as luxury and they only have those for special occasions. So no one cares really about the idea of ‘organic’ or ‘free range.’ They would probably look at you funny if you talked about treating the animals in ‘humane’ way. Animals don’t get treated in any special way, but they are also valued so it’s likely they don’t get treated in any bad way either. I remembered a story from my father who lived in a poor village in Indonesia when he was young — having eggs as special meal for a birthday as those were too expensive to get for day-to-day consumption. That makes me feel grateful of the blessings we have today — in many cases it seems that if anything we need to reduce the consumption as the excess can be detremental to our health.

The photo below was taken from the dirt road as we walked into the village. You can see the chickens just roamed around on what looked like a pretty dirty grounds. 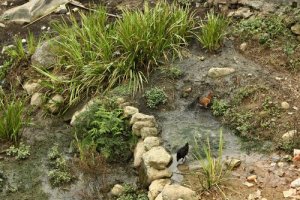