When traveling these days, it’s difficult to travel without having some form of electronic communication. At the minimum, having access to the Internet via connection at an Internet cafe is useful so one can communicate with others during the trip, or use the Internet to find the latest, up-to-date information about the places to be visited. As you travel to different places in the world, it is also interesting to observe how the locals use technologies.

During our Southeast Asia trip in 2010-2011, one thing I noticed was how ubiquitous wireless communication was in the countries we visited, including places that one may think as a third-world or developing countries. In Cambodia, our local tour guide mentioned that one of the most well-known brands there was Nokia — almost everyone had Nokia mobile phones, some never even had or known the concept of land phone lines at homes or offices. In Indonesia, these days Blackberry is king. Even though in the US people abandoned their Blackberry devices for iPhones and Android smart phones, in Indonesia Blackberry had gained popularity because of its Blackberry messaging that is seen as more cost effective way to communicate in place of SMS / text messaging.

When we were in the mountainous region of Sapa, what was surprising for me to observe was how good the wireless signal reception was there — I had full 4 bars on my phone which was even stronger signal than some places in the Washington, DC, area where I live. In some areas, the developing countries today have more modern and sophisticated communication network as they essentially went directly to the latest technology rather than having to upgrade existing, outdated legacy infrastructure that’s in place.

The photo below shows my Blackberry with the signal reception I got in Sapa — full bars, even when we walked around in the nearby villages. 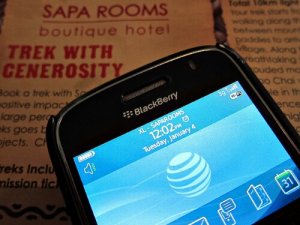