We arrived back in Hanoi after the overnight train ride from Lao Cai at around 5 am. This was when another experience of dealing with the local customs/culture, experiencing the kindness of others, and overall being out of the comfort zone started.

After getting off from the train, we followed other passengers towards the exit from the station. There it seemed to be a little chaotic; it wasn’t clear where we should be going. I suppose this was normal at the Hanoi station; we didn’t experience this on the way out a couple of days before since we had someone arranging our departure. On the return, we’re pretty much on our own.

There were some taxis lining up inside the station’s parking area, but there wasn’t any clear sign to indicate if those are the official taxis to take (if such regulation existed). We decided to just continue walking outside the train station. There it was even more chaotic with people offering taxi service everywhere. I guess I was still half awake and not fully alert when I responded and followed one of the taxi drivers to his car, expecting it to be like what you expect in other countries — get in the car, tell the driver where to go, and then we would go with the taxi meter running. The driver loaded our luggage into the trunk, and we entered the back seat. I told him the address where we needed to go, expecting him to recognize it and start the meter. Instead, he told me a price for the ride that was clearly inflated. I wasn’t expecting to do negotiation at that moment, but even instinctively I said no and told him it’s too expensive. He did come down on the price, but at that moment I realized he got us captive since our luggage was already in his trunk. It was still a bit higher than I think the cost should be, but at that point we just wanted to get to our destination.

Our destination that morning was 6 on Sixteen, the new boutique hotel in Old Quarter Hanoi that was opened only a month before by the same proprietor as Sapa Rooms Hotel where we stayed in Sapa. We started our journey to Sapa at 6 on Sixteen, and we needed a pick up address for the tour company that would take us for the next leg of our journey, so we gave them the address of 6 on Sixteen. The problem was that our pick up time was not until around 8 am, and it was still 5 am. So we needed a place to wait for a couple hours in between.

Before leaving Sapa, I asked the folks at Sapa Rooms if it was okay to come to 6 on Sixteen in the morning as technically we’ve already checked out from Sapa Rooms by then and since we’re not planning on staying at 6 on Sixteen afterwards, they were not obligated to deal with us at that point. The Sapa Rooms manager said it’s okay and he would let the staff at 6 on Sixteen know about our arrival.

When we arrived at 6 on Sixteen, the place was still closed, and the area was practically deserted. The only people we saw on the street were traders who were on their way to the market in early morning, or some drunk foreigners who were on their way back after a night of partying. I was a bit skeptical whether the folks from Sapa did notify their counterpart in Hanoi about us. But we didn’t want to stay out on the street with our luggage, so I rang the entrance door bell to the hotel. After waiting for few minutes, a half sleepy gentleman came out. I told him about our story. I’m not sure if he did get all that I told him, but he nodded his head when he heard Sapa Rooms. He let us come into the restaurant/lounge area of the hotel, which was still not set up for business yet. As we sat down, he asked us if we wanted any drink, and he gave us the drink menu from the restaurant. We asked for a cup of coffee and a fruit juice drink. He nodded and went to the kitchen and made us the drinks.

We sat there and waited until a couple of hours later when our ride came and picked us up. During that wait, we saw the area came to life as the day broke, and more hotel staff came in to start the day. One lady later on asked us if we wanted to order some breakfast. I looked at the menu, and it said the restaurant opened at 6 am. It turned out the gentleman who opened the door for us earlier was one of the hotel staff whose job was to guard the door, not necessarily to serve at the restaurant (especially when it was after hours). So we actually experienced some kindness from a stranger and an above and beyond service.

We ordered breakfast, and around 8 am, a minivan showed up and a lady came in and announced my name. There was our ride for the next part of our journey, and I felt relieved that the transition worked out. That morning we had yet another negative experience dealing with taxi in Hanoi. The hospitality of the hotel staff that morning, however, offset the negative part of the morning and was one that I would always remember and it’s reason for recommending the establishment both in Hanoi and Sapa to others coming to visit the area.

The photo below was taken as we waited in the hotel for our ride. Here was Kristi killing time with her Blackberry (there was wi-fi at the hotel as well, so we could connect). 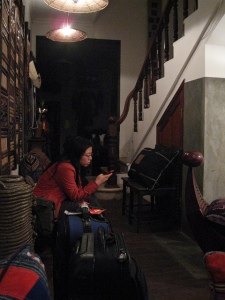