Sometimes when you go on a trip as part of a group tour, what makes the trip interesting and memorable is not only the actual places you visit, but the people in the tour group that you share the experience with. Prior to our trip to Ha Long Bay, I had never really gone on a cruise, so I didn’t quite know what to expect nor did I think much about the experience. My concern in the beginning was about the transit so we could join the group at the right place and time, so once that was accomplished, then it was like a reset happening (now what?), and at that point I just decided to enjoy the ride and let the experience unfold.

When Kristi and I were picked up at 6 on Sixteen Hotel in Old Quarter Hanoi, there were already four other people plus the driver and the tour company staff in the van. Quickly Kristi and I recognized that these four people were either from Malaysia or Singapore, as they spoke a mix of Malay, English, and Chinese with each other (later on I learned that they were two couples who were originally from Malaysia, but they lived in Sydney, Australia). We didn’t say anything to these folks, and decided to just sit quietly and enjoy the ride.

The next stop was at a busy street still in Old Quarter Hanoi, across the street from a narrow alley. Out come two young ladies in their early 20s. They looked like backpackers. Later I learned that they were from Canberra, Australia, and they were in the beginning of a several-week-long backpacking journey in Southeast Asia. Both were just finished their college years, so this seemed to be one of those ‘gap year’ trips that people took after finishing a stage in life and before moving on the next stage.

The last stop in Hanoi was at a fancy hotel in the French Quarter area. The last group being picked up was two travelers in their 40s. We learned later that they were brother and sister from the US. Both were very accomplished professors at universities in the US, and they were towards the end part of a few week tour of Vietnam.

After picking up that last group, the tour staff lady that seemed to be responsible to get all of the passengers rounded up was dropped at a location so she could go back to her office. The tour group went with the driver to continue the drive out of Hanoi towards Ha Long City.

In the middle of the ride to Ha Long City, we stopped once at a place that seemed to double as rest area and souvenir shop. Very strategic I suppose, let the tourists stretch, get some refreshments, and potentially purchase some souvenirs. During the ride and even at this stop, it seemed that each group in our van pretty much interacted within itself and not necessary mingled with the other groups.

When we arrived in Ha Long City, we were welcomed by another tour staff who instructed us to carry our luggage and follow him to a big dining hall where we were to meet the rest of our tour group and getting a little welcome message and orientation from our tour guide.

There were two other groups that we met there. One group was a family of six, an older Vietnamese lady who was the matriarch of the group, her son, and her two daughters, each accompanied by their husbands. All of the lady’s children and in-laws were in their late 20s or early 30s. The two in-laws were caucasians. The family actually lived in Idaho, USA, and they were coming to Vietnam to visit their mom’s homeland. One of the daughters and her husband were actually in the middle of a round the world trip, and they decided to meet up with the family there in Vietnam.

The last group was a couple from the Netherlands who at that time actually lived in Rwanda. They were in the middle of an independent tour in Southeast Asia.

The last person we met was our tour guide. His name was Hoang, but he said everyone called him ‘Smiley’ as he smiles a lot. Very lively personally — fit to be a tour guide especially for a cruise that would go on for almost three days. Smiley welcomed us to our trip, and provided us with some logistical information as well as asking everyone to introduced themselves and let the group know where each person/group came from. That help loosen up and get the group interacting a little bit, though each group largely still kept the conversation within itself.

We were then ready to start our cruise, and the first part was to board a tender with our luggage, and headed towards the junk boat that would be our home for the next couple of days. Below is a photo that I took while we were on the tender after leaving the pier. 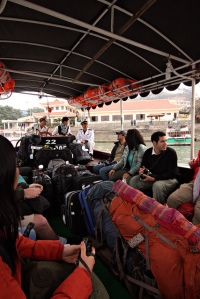