After finishing our bún cá and paying for the delicious dish, we continued our walking tour in the Old Quarter Hanoi. We decided to play it by ear and just turned on the next block to see what’s on the next street. The Old Quarter Hanoi consists of around 36 small streets, each street was named after a particular item that was sold at the stores on that street (e.g. Hàng Gà means Chicken Street, that’s where you could find people selling chickens, Hàng Giầy means Shoes Street, where you can find stores selling shoes, etc.). Today you can still find some of the specializations on the streets, though they may not necessarily match the original street name.

It was a weekend night, so all the stores were open. In front of the stores, there were many street vendors setting up their stands. This made the narrow streets felt even narrower. We pretty much walked close to the middle of the street as there was no sidewalk to walk on. Pedestrians shared the street with motorcycles. During the day, there were cars also going through these streets. At night, it’s pretty much impossible for the cars to go through there.

On one of the streets we noticed something that we didn’t expect to see. We were getting used to see streetside vendors selling snacks or some hot dishes. However, on one street, we saw vendors selling (fresh?) produce: vegetables, meat, etc. It’s kind of odd and out of place to see these on the side of a busy commercial street. I wonder who would be going out on a weekend night and while at it also buy fresh produce to take home… I also thought of contrasting this to how we buy produce in the grocery store in the US. In the US, we would watch for ‘sell by’ date to make sure we’re getting fresh items. In Hanoi, well, you have to know how to select your produce from the market and being able to determine if something is fresh; there is no such thing as ‘sell by’ or expiration date.

I took the photo below as we walked through one of the streets. Here you can see a lady selling (fresh) meat, right in front of a store that sells household goods, and next to the motorcycle parking. Does that look like a place you would get the meat for your dinner from? It was around 50 F temperature that night, so it’s almost like having natural refrigeration for the meat. Though I wasn’t sure how clean it was to have it out there with exhaus from traffic passing by in the air… 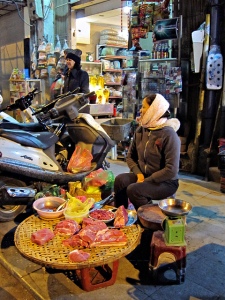