Water puppetry is a traditional art form in Northern Vietnam. It dates back to 11th century when it originated in the villages of the Red River Delta. Traditionally the performance was done in a waist-deep water. Originally it was done on the flooded rice fields in the villages, now it’s done in a special theatre with a pool in front as the stage. The performance is accompanied by a traditional music ensemble, including a vocalists who would sing songs which tell the story being acted out by the puppets.

One of the well-known water puppet troupes in Vietnam can be found in Hanoi. So if you are interested in traditional performing arts in Vietnam, this is a great place to experience that. The Thang Long Water Puppet Theatre is located at the northeast side of the Hoan Kiem Lake, so it’s convenient to go to the performance while you’re exploring the Old Quarter area.

The show we attended was quite packed, mostly with foreigners. The songs performed were in Vietnamese, so I didn’t quite understand the story line, but from watching the skits done by the puppets, it seemed to be based on some traditional folk tales. Even without understanding the words, it was still an enjoyable experience. The singers and musicians performed the soundtrack beautifully, and the water puppets moved in a nicely choreographed manner.

The photo below was taken from our seats all the way at the back of the theatre. You can see the stage set up with the musicians playing on the left. 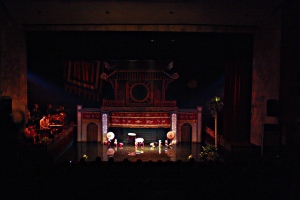