After having our seafood dinner, we continued our night in Singapore with some sightseeing. When we got into a taxi cab, the driver asked us where we wanted to go. I told him that we wanted to go the Central Business District area, near where the Merlion Statue is located. He mentioned One Fullerton, and I said sure. I didn’t know where or what One Fullerton was, but I figured if it’s in the CBD area, it’s hopefully close enough that we could walk around and explore.

The taxi took us downtown, and when I saw The Fullerton Hotel on the right and the Merlion Statue on the left, I was glad that this time the taxi took us exactly where we wanted to go. The Merlion Statue that is the mascot of Singapore stood tall near the waterfront at the Merlion Park, facing the Marina Bay. It was a nice weekend night, and there were a good number of tourists at the Merlion Park taking photo of the illuminated statue. In the background there were the skyscrapers in the Central Business District area, and right behind the Merlion Statue there was The Fullerton Hotel, a five-star hotel that had earned recognition among the best hotels in Singapore and in Asia.

The name One Fullerton that the taxi driver mentioned referred to the two-story waterfront development right next to the Merlion Park. We walked there briefly to check out what’s there, and it looked like it was filled with restaurants, lounges, and clubs with a nice view of the Marina Bay. The patrons were mixed between locals and expats. That made sense given its location near the CBD and the touristy area of downtown Singapore. The view across the Marina Bay from there was very nice. In the eastern side you could see the Esplanade complex with its durian-shaped main building. The Esplanade is the main facility in Singapore for performance arts where you can attend concerts, theatre performances, operas, etc. It also had an outdoor pavilion, and that night we could hear the sound of music playing from there; it seemed that a concert was going on.

On the southeast part of the Marina Bay, we could see a newer landmark in Singapore, the Marina Bay Sands resort hotel. It’s shaped like a ship sitting on top of three towers. It was billed as the world’s most expensive standalone casino property at S$8 billion (including the prime real estate where it is located). I remembered watching a special reality show on the Food Network a couple of years back about the preparation and opening of a restaurant / night club called Ku De Ta, which was located at the top of the Marina Bay Sands. It had amazing view of Singapore, but it also looked like a very expensive place and you need to be ready to shell out some cash to go there — not what we had in mind for our short trip in Singapore.

After spending time in the Marina Bay area, we decided to follow the map that we took from our hotel to walk towards our hotel. It would be quite a hike, but we thought we would just walk roughly close to the MRT route, so if we got tired, we could either take the MRT or get a taxi to finish the trip back to the hotel. We ended up walking all the way back to our hotel in the Lavender area. Along the way, we passed the historic Raffles Hotel, the Bugis area with its shopping malls and the Arab Street area that looked like an interesting neighborhood of Arab immigrant stores to check out during the day (it was pretty dead at night). We made it back to our hotel after about an hour or so strolling, ready to hit the sack after a long day that started in Hanoi.

The photo below was taken from the One Fullerton area. This is the Marina Bay Sands resort hotel, with its ship-like platform at the top supported by the three towers. 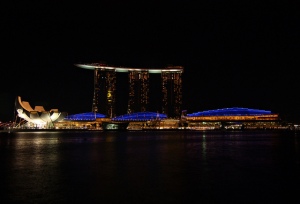 1 thought on “Strolling Through Downtown Singapore”