When traveling long distance on the road, you need to also consider where you will be spending the nights along the way. The most important consideration is that despite of the desire to get to the destination in the shortest amount possible, your body and mind (especially if you’re the driver) will need some time to rest after several hours sitting in the car and concentrating on the road). Otherwise, it may cause some risk of endangering yourself and others on the road — you need to know your physical limits and ensure that you don’t push it beyond.

In several multi-day, multi-destination road trips I had done in the past, typically I considered three options for lodging.

First option is no lodging at all, but stopping at rest areas whenever I feel like I need some break. This is a good practice to do even when you’re only doing a day trip, but I would consider this option only if I’m driving with an alternate driver who can take turn with me in driving / resting, thus we’re not losing time from the rest stop but still keeping the drive safe. And I think the longest stretch I had done such segment of a trip was less than 24 hours, also knowing that at the end of that stretch I would have an opportunity to rest (e.g., a cozy room waiting somewhere to rest and freshen up).

Second option is to plan the route so you would end up reaching a particular destination along your trip where you can make a prior arrangement for a place to stay overnight. That could be staying at the home of someone who I know, or staying at an accomodation at the particular location. This is my preferred choice, as personally I’m a planner and I would like to have things prepared or planned ahead of time and I know exactly how to structure my schedule.

The third option is to just ‘wing it’ and drive as far as you’re comfortable of going, and find lodging option wherever and whenever you get to your ‘end of day.’ I’m least comfortable doing this as it goes against my nature of having the trip structured/planned, but sometimes you may not have a choice if your trip is happening in the last minute or you can’t easily planned out the trip due to whatever reasons.

During the coast-to-coast road trip with my brother, we had about five days to complete around 3,300 miles. That means on average around 660 miles, which means roughly around 10 hours of driving a day. Plus we’re driving east bound, meaning that we would be ‘losing’ time as we go across timezone boundaries. So we did rough planning as we mapped our journey. We knew we would be passing Chicago area during the trip, and my brother’s old college friend lived in the suburb of Chicago. And then between Chicago and New York City, we thought we could take a little longer trip through Washington, DC, area, which added several hours to the driving time, but that would mean we can spend one night at my home.

That left us with figuring out where to stop for the first two nights on the road between Santa Monica and Chicago. In the end, we decided to make get into the spirit of the Mother Road travel, and purposefully not planning where we would be staying for those two nights. We thought we would just push as far as we could on the first day, hopefully to get somewhere close to Arizona-New Mexico border, and then on the second day, do another push to get to somewhere in Oklahoma that would be roughly covering another third of the distance towards Chicago.

For the first night, we had one place in mind as a place to stay that we thought would be an experience in itself. In Holbrook, AZ, there is a family-owned motel called the Wigwam Motel that is unique because each of the motel rooms is inside a wigwam-shaped structure. The place had been around since the heyday of Motel 66, and it was an inspiration for the wigwam-shaped motel in the animated movie Cars. A few hours before we reached Holbrook, I called in the Motel to see if they had any room available for the night. Unfortunately we were not the only one with such idea, and the place was sold out for the night. So as an alternative, we did stay at a motel in Holbrook, but it was one of the more modern alternatives, a motel in a chain called Travelodge. We only stayed for a few hours of sleep and to take showers, so it wasn’t really much to remember other than it served the purpose.

In the morning, as we continued our drive east bound, we stopped in Gallup, NM, for breakfast. We passed another landmark on Route 66, a hotel called the El Rancho Hotel. We didn’t stop and only took a photo of the hotel from the road, but this is one place that should be considered if you’re looking for an accomodation around there. The hotel was built by someone connected to the movie industry to provide comfortable lodging fit for movie stars, as between then 1940s and 1960s Holywood filmmakers would shoot the Old Western movies in the area that is about as real western atmosphere as it gets. There is the desert, the nearby Native American reservations, and the other worldly vistas of red rock mesas. It’s pretty cool to think that the hotel’s past guests included names like John Wayne, Ronald Reagan, Katherine Hepburn, and Kirk Douglas.

So there it was, the experience of finding lodging options along the western part of Route 66. The photo below was the El Rancho Hotel in Gallup, NM. We did drive past the Wigwam Motel in Holbrook, AZ, but it was dark in the middle of the night, so we didn’t have any photo of the unique motel. 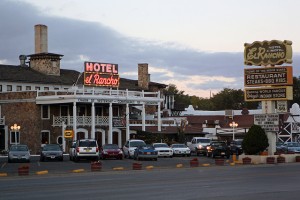