The Loretto Chapel is a chapel of a former parochial school run by the Sisters of Loretto in Santa Fe, New Mexico. It is famous for its unusual spiral staircase. The building was constructed in 1853. During the construction of the building, they noticed that there was an oversight in the planning that the staircase needed to get to the choir loft was not in the plan. The size of the building was too small to put a normal size staircase. The story has it that the nuns prayed for St. Joseph’s intercession in nine days, and then a stranger showed up and told the nuns that he could help them build a staircase for the chapel provided that he was given privacy to work on it for three months. So he locked himself in the chapel and worked on the staircase, and when he was done he dissappeared. The nuns offered reward to find the carpenter, but it was never claimed. Many who saw the resulting staircase thought that it might be St. Joseph himself who came and helped built the staircase.

Aside from the mysterious person who worked on the staircase, the part that many considered as miraculous was the fact that the staircase was constructed without the use of nails and it does not have a central pole to support it. When studies were done to learn more about the structure, they learned that the outer helix combined with small radius of the inner wood stringer provided the structural support for the staircase.

Regardless whether it was a miracle or not, in the end the nuns had their prayers answered and they ended up with a beautiful staircase for their chapel. The staircase is a wonderful work of art that is worth checking out when you are in the area. We visited the chapel briefly during our stop in Santa Fe. Though it felt a little bit like it’s a tourist trap with many other tourists lining up to come into the small chapel, the visit was worthwhile as we got to see not only the staircase but also the beautiful interior of the chapel itself. 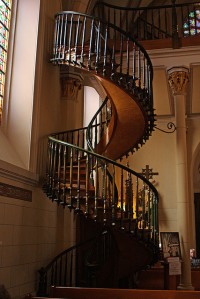