We reached Chicago, which was east end of the Route 66 part of our coast-to-coast road trip. That ended the more exciting part of our journey, but we still had quite a long distance to to reach our actual destination, New York City. And my brother had to be back home for an event in a couple of days, and we had to return the rental car in New York City before we get penalized for going over. So the rest of our journey was about making it back to New York City within the time constraint. But we did have at least one more ‘meaningful’ stop along the way. Since we would be passing Toledo area around lunch time, I had made a lunch plan with a family that was influential in my life — yet more ‘life-long friends’ to meet during the trip.

I considered this family my adopted family as they were the family whom I stayed with around 20 years ago when I first came to the United States as an exchange student from Indonesia. When I applied to spend one year of high school in the US, I was matched with a host family in a small town in Southeast Michigan. It was quite an experience as I came from an urban life in a city of more than 10 million people, and I was placed in a little village of 300. For my host family, it was an experience as well as prior to my arrival, they knew almost nothing about Indonesia.

It ended up to be a great experience for all of us, and my host family also played an important role in convincing me to go to a college in Southwestern Michigan for the next four years. During that time, my host sister and brother also went to college at a school nearby, so we were able to keep in touch a little bit. Years later, my host siblings got married, and I came to their weddings from wherever I happened to live. In many of those occasions, I met their extended family, and everyone in the family pretty much considered me as one of the members of the family. So it felt really like my adopted family away from my real family back in Indonesia. A few months before this coast-to-coast trip, I did a road trip in Michigan and visited the family for a couple of days. Some of the family friends in the little village also still remembered me, and going back there to visit really felt like a homecoming.

Since my host sister and her family lived in the suburb of Toledo near Interstate 80 that we would pass on our way to the east coast, we thought it would be nice to be able to meet them even only for lunch. We timed the lunch meeting so my host sister could pick up her daughter from preschool and her husband could join us during his lunch break. My host mom decided to take the afternoon off from work and drove about an hour away to meet us as well.

We made it there within less than half hour from the original target time, so it was not too bad of a timing. Just like the dinner we had with my brother’s college friend the night before, the actual lunch itself was not that memorable. But it was nice to be able to spend even only an hour with old friends whom you consider as family. These were the times that you’re grateful to have people in your life that enriches your experience and make life worth living. 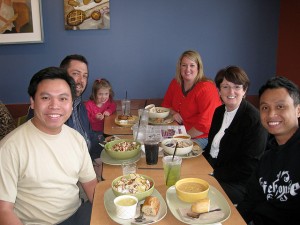