Corn dog is a variation of hot dog where you have the hot dog wiener stuck on a stick, coated in corn batter, and deep fried. In the US, you can often find corn dogs at festivals or local fairs. If you ever had a corn dog, have you ever wondered who came up with the idea for a corn dog? When we looked for interesting places along Route 66, we found out a place that claimed to be the first to come up with corn dog. The place is called Cozy Dog Drive In, and it’s located in Springfield, Illinois.

Ed Waldmire Jr. and his wife Virginia opened up the Cozy Dog Drive In in 1946 after Ed came up with the idea for the corn dog and made it popular among the armed services after World War II. The place has been serving the corn dog that is called the Cozy Dog ever since, and during the heyday of Route 66 in 1950s, it became a popular landmark along the route.

Later on, Ed and Virginia’s son Bob ended up becoming a famous character along Route 66 as he open a restored store along the old Route 66 in Arizona where he lived during the winter time, and spent his summer driving up and down Route 66 on his VW van. Bob and his VW van became the inspiration for the character Fillmore in Pixar’s animated movie Cars.

We passed Springfield area around dinner time. We already planned to stay at my brother’s friend’s place in the suburb of Chicago for the night, and we wanted to meet up for dinner when we get there. But knowing that we wouldn’t be reaching Chicago area until close to midnight, we thought we would stop quickly at Cozy Dog Drive In in Springfield for some snacks.

We found Cozy Dog Drive In on the busy business street in Springfield. Today it looked like just another busy road in a city, but back in the day this was part of Route 66 that would likely be among the first stops traveler made when traveling from Chicago to Santa Monica.

The restaurant was similar to many local fast food joints, except that you could find some Route 66 memorabilia that would tell the story about the past. We ordered some Cozy Dogs and decided to take them to go to save time for the night.

The Cozy Dogs themselves tasted like what we expected of corn dogs. What made them special was the story behind the place where we got them. Now we could say that we’ve eaten corn dogs from the place that originated them all. 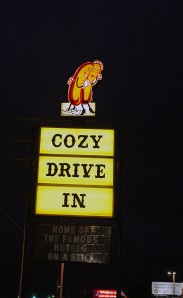