The last stop on the Seoul City Tour before we headed back to the Incheon International Airport was lunch at a local restaurant. I did not know the name of the restaurant as the sign was written in Korean, but it’s pretty clear from the picture outside the restaurant that they had beef dishes.

At the beginning of our tour, the tour guide explained that we could pick from two options for lunch; each person could get either bulgogi (grilled beef dish) or bibimbap (mixed vegetables over rice). I had had both of these dishes before, so I just picked the bibimbap. Some of folks in our tour group had never had either of these Korean dishes before, so they had to decide after listening to our tour guide’s description and looking at photos of the dishes.

When we entered the restaurant, we were seated at a couple of long tables in one corner of the dining area. The restaurant was pretty small, and it was actually quite packed with locals for lunch. I thought that’s good to see the locals also eating at the restaurant; that means they’re not catering only to foreigners/tourists, and the food should be quite authentic.

I sat together with three new friends that I made during this tour. Wendy was from Los Angeles, CA, and she was on the way back home after visiting Thailand and Indonesia. Susan was from Philadelphia, PA, area, and she was on the way home after visiting Laos and Cambodia. Rajan was from Houston, TX, and he was on the way to Malaysia and Indonesia for business trip. My brother lived in Los Angeles area at that time, and I had worked on projects in both Philadelphia and Houston, so I was able to relate with all of these travelers. It was pretty cool listening to Susan and Wendy talked about their experiences during this trip (pretty neat hearing about my home country, Indonesia, from the perspective of a visitor like Wendy), and I was able to give recommendations to Rajan on possible places to visit during his upcoming visit to Jakarta.

The meal itself was pretty good. This was the first time for these other travelers trying Korean food, so it was great to see them first getting surprised seeing the various side dishes served with a meal at a Korean restaurant, and then enjoying the dishes for the first time. My bibimbap was pretty good — similar to what I had before in the United States.

After lunch, we headed back to the airport to end the tour. We had to go through slow-moving traffic, so our tour guide was a little concerned that some of us might miss our flight. She asked for everyone’s scheduled departure time, and we found out that I had the earliest departure time compared to others. We ended up arriving at the airport about 35 minutes later than expected, but fortunately it was still enough time for me to go through the security gate and walked to the departure gate. I got there with about 10 minutes to spare til the boarding time for my connecting flight.

That ended the 22-hour stop in South Korea during my trip from Washington, DC, to Jakarta, Indonesia. I wasn’t expecting it to be full of adventure, but I’m glad I was able to get a glimpse of South Korea during that brief stop. If you ever have to stop in transit at Incheon International Airport, I highly recommend making the most out of your stop by taking the transit tour.

The photo below was taken at the restaurant while we were waiting for our food. You could see me with my three new friends, Wendy, Susan, and Rajan, and around us were the locals either their lunch in a busy restaurant. 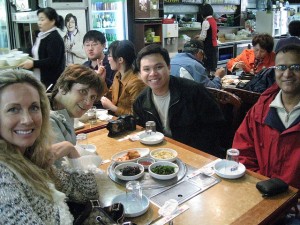