When you travel, sometimes you’re faced with unexpected circumstances that alter your travel plans. When such situation occurs, your reaction to what happened could make a difference in determining how good or bad the travel experience becomes.

Last week I traveled to Houston, TX, to attend a friend’s wedding. The trip was a short one; I left on the last flight out of Washington Dulles Friday night and was going to come back on the early Sunday afternoon flight.

Saturday was a beautiful day, perfect for meeting another friend for brunch, and then attending my friend’s wonderful outdoor wedding in the late afternoon and evening.

On Sunday, I was invited by my friend’s parents for a brunch at their home. My flight home was scheduled at 2 pm, so I thought I could stop by at the brunch, stay for a little bit, and still able to make my flight without any problem. I had a wonderful time meeting my friend’s family and friends at the brunch, but I left a little later than I planned. I still made it to the airport about one hour before my scheduled departure, and it all still went according to the plan, until when I reached the security check line.

The security check line was very long, though it was continually moving. I looked at the clock and at the time I entered the line, it was still 45 minutes to the scheduled departure time. Still some hope, I thought. We slowly inching through the line, and time passed by.. We passed the time when my flight started boarding, and by the time I reached the end of the line, I hear on the public announcement the last call to board for my flight.

I tried to rush going through the line, and made a mistake that I never made before: I took my laptop out of my backpack, but I put the backpack and the laptop in the same bin. That meant the whole thing had to go through the x-ray machine again.

After that slight delay, I packed my stuff, and ran towards my gate (which of course happened to be the one all the way at the end of the terminal). On the way, I felt things in my backpack shifting, and as I slowed down, my laptop fell off. I forgot to zip up the backpack’s main compartment at the security check. My laptop seemed to be okay, so I packed it up, and continued my run to the gate.

I arrived at the gate with the jetway door still open, and but unfortunately they had already closed the plane’s door even though there were still few minutes to the departure time. The gate agent checked for the next available flight to Washington Dulles, and she said the next flight at 5 pm looked full, and the 7 pm looked okay. I had to go to the customer service line to get to either of those flights. At the customer service line, the agent got me confirmed on the 7 pm flight, and put me on standby list for the 5 pm flight. That meant 3-5 hour wait at the airport.

I went to the departure gate for the 5 pm flight, which was located in another terminal. So I had to take the airport train to get there. But I had plenty of time to get there, so no rush at all.

When I reached the gate, I still had more than 2 hours until the boarding time of the 5 pm flight, so I decided to walk around the terminal. I had never been to IAH before, so this was a new experience to me. Terminal E was the newest terminal at IAH, so it looked pretty nice, and it had good selection of stores.

As I looked through the store directory, I saw that there was a Pappadeaux restaurant in this terminal. Pappadeaux is a Texas-based Cajun, seafood restaurant chain. I liked going there when I come to Texas. A friend reminded me before I left for the trip to eat there while in Houston. I thought since this trip was so short, I wouldn’t have time to do that. Well, it turned out that I would be able to go there after all.

So I decided to spend my free time before the flight at Pappadeaux. The restaurant at IAH was located on a deck above the concourse. I was seated at a table with a nice view of the terminal at the lower level. I ordered a Bayou sweet tea (a cocktail based on the flavors of the southern sweet tea and lemonade) and a very nice oven-roasted Chilean sea bass served on a bed of spinach and with roasted tomatoes and crab meat gratin. Wonderful meal — one I wouldn’t have had I made my original flight schedule.

After the nice meal, I walked back to the gate, and saw another friend of the groom who was on his way back home as well. He’s actually flying to DC area as well, but to different airport. He was on standby for a flight earlier than his scheduled one. We had a good conversation talking about our past experiences traveling. His flight came up before mine, so he left to go to his gate and I stayed at my gate waiting for the boarding time.

As we reached the boarding time, I checked with the gate agent to find out my chance for making this flight. The gate agent said the flight was oversold by 2 seats. That didn’t sound good for a standby passenger, but she said stay around the gate anyway to see if I could make it. I waited, and I heard the gate agent announcing the oversold situation and asking for volunteers to move to later flight.

After they boarded almost everyone, the gate agent had to calm down a couple of passengers who had to gate check their carry-on luggage since there was no more cabin storage space available. They were worried because they would be connecting at Dulles. I decided to wait until all of that was done before asking the gate agent about my chance on making the flight.

I was ready to hear her telling me that the flight was full and I had to go back to terminal B for the 7 pm flight. But it turned out that they had a couple of passengers volunteering to go on a later flight, and there was one spot open. It was a middle seat, and I had to gate check my carry-on luggage, but it didn’t matter as I made it on the flight.

So that was my unexpected afternoon experience at IAH. Looking back, there were many times that afternoon where I could’ve lost my temper, get stressed out, or annoyed with the circumstances. But I’m glad I didn’t, and the afternoon turned out alright. I arrived home few hours later than planned, but I was able to enjoy a nice meal while waiting for my flight.

I think the sayings “don’t sweat the small stuff” and “when life gives you lemons, … make lemonade” are good to remember when facing unexpected situations while traveling (or even in life in general).

I took the photo below at Pappadeaux just after my order was brought to the table. You can see my Bayou sweet tea and Chilean sea bass dish on the table. In the background you can see the giant swordfish in front of the restaurant’s entrance, and the airport gate downstairs and a couple of flight crew walking. 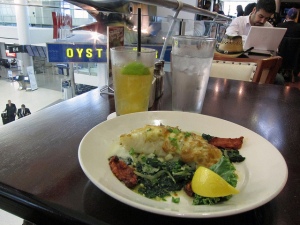