Times Square is another landmark in New York City that pretty much all visitors to the city would visit. Located in Midtown Manhattan where Broadway crosses with Seventh street, it’s a commercial district that along with the Statue of Liberty is among the most recognizable part of New York City. Most people recognize the Times Square from a couple of things: the general vicinity usually called ‘Broadway’ with the theatres where you can see plays or musicals, and the New Year’s Eve Ball Dropping event to celebrate the turn of the year that every year is broadcasted everywhere.

I’ve been to Times Square many times, either to go there with other visitors who had never been there, or to watch one of the musicals that is playing there. It’s one thing to say you’re going to see a Broadway musical when the touring company comes to your hometown; it’s another thing to say that you’re watching a musical on Broadway itself. If you’re visiting New York City and would like to experience that, but either can’t afford or are not willing to spend money for the full price of the seats (which these days can run more than $100 per seat — it gets really expensive especially when you have many people in your party), you can try to get last minute availability tickets at the TKTS booth in Times Square area itself. You can possibly get tickets at half price or less; though it’s likely for less known shows (the big ones usually sells out ahead of time).

The photo below was taken at the Times Square area. You can see the skinny, tall billboard at the end of Times Square, where during the New Year’s Even the ball gets dropped. 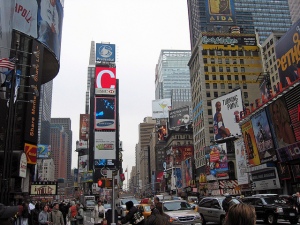