After a long day that started with early arrival from Hanoi, and continued with an all day trekking to the nearby villages, we’re ready to enjoy some rest at our hotel in Sapa, Vietnam. For dinner, we wanted to have something local. There were restaurants in town serving western foods, but we’d like to try something that we wouldn’t find elsewhere.

Dave and Anna, the Australian couple we met during the trekking, suggested a restaurant that they went to the night before called Sapa Lotus Restaurant. The restaurant, located in downtown Sapa, served local dish that they said was very good, the hot pot dinner for two. Given the cooler weather in the mountain area, that sounded like a good option — local food with nice warm soup.

We found the restaurant pretty easily. When we got there, we were the only one in the restaurant, so it was a little concerning. But we went ahead and stayed there, and ordered the combination hot pot that came with assortment of meats and vegetables. The pot with the broth seemed to be closer to the Japanese style of hot pot, which is lighter than the Chinese style. It also had some herbs to flavor the broth. When the raw ingredients were served at our table, it seemed a lot (especially the vegetables). However we were able to finish everything and it was the right amount for the two of us.

As we we’re in the middle of enjoying our dinner, a group of Vietnamese visitors came. They seemed to be a local tour group consisting several families. Later on we found out that they were going to go to cross the border to China nearby to go shopping there.

The photo below was taken during the dinner. Here is Kristi adding the ingredients to the hot pot. 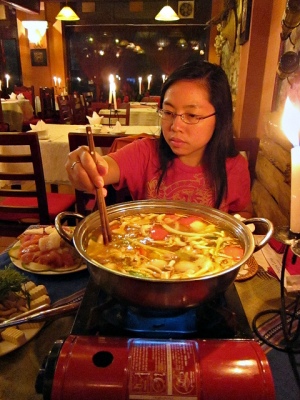