When we visited the village of Cat Cat near Sapa, Vietnam, I couldn’t help of thinking about the concept of ecotourism and how it seemed to be applied there. Compared to the other villages we visited the day before, Cat Cat clearly had been developed to be more tourist friendly with the nice walking path down into the valley and back up, complete with maps along the way, and during the busy tourist season, even some planned cultural events, demonstration, etc. There was fee collected on the way to the village, and ticket is needed to enter the village by foreigners. It was quite organized that in the beginning I wasn’t sure whether we’re entering a real village or a theme park.

Since we came during an ‘off day’, there were not many visitors around, and while there were a couple of souvenir shops open along the trek, clearly they were not anticipating big crowd that day. As we walked through the heart of the village, we passed the homes of the locals that looked like real homes in the village. While the path through the village might be developed to make it more comfortable and aesthetically pleasing for the visitors, the buildings in the village seemed to be the local homes without much modification. And as we passed some of the homes, we could see the locals going about their lives normally — nothing was staged. Nothing exciting too see or much of ‘photo op’ along the way, but I thought this was a more authentic atmosphere to portray to outsiders who wanted to know how the locals live.

That reminded me back to the concept of ecotourism. In the last couple of decades, there has been a lot of emphasis on this concept especially as the increased globalization opened up many new destinations around the world that are rich culturally but previously were not well known as travel destinations. One definition of ecotourism is as follows: ‘Ecotourism a form of tourism involving visiting fragile, pristine, and relatively undisturbed natural areas, intended as a low-impact and often small scale alternative to standard commercial (mass) tourism. Its purpose may be to educate the traveller, to provide funds for ecological conservation, to directly benefit the economic development and political empowerment of local communities, or to foster respect for different cultures and for human rights.’ You can see from this definition how it could be a really good thing if done correctly as it would benefit the locals while at the same time preserving the environment and culture for future generations. However, in reality, this could be quite difficult to accomplish, as some of the goals may be at odds with each other when implemented (e.g., trying to benefit local economy vs. minimizing negative impact from the outside world). And sadly some government or travel operators used the ecotourism idea to promote their business while in reality they didn’t really do what’s needed to meet the goals of this type of tourism.

One other interesting observation I heard once on a travel program was about the impact of global economy on the local culture, and how the local culture itself is evolving because of that. The case in point used during the discussion was Ireland, where in the early 2000s there was a big economic boom that the country attracted immigrants from Eastern Europe and some European Union countries. As a result, the local culture had become more diversified. This became an unexpected surprise for tourists who came to Ireland with the expectation of experiencing the authentic, perhaps romanticized Irish culture. When they could actually find those, often times it would be staged as show only for tourists, and gone was the authentic culture to observe.

I wonder how long before such effect would impact places like Sapa. The draw of economic benefits I think would be much stronger than simply preserving the old way of life. We already saw during the trek the day before how some local minorities became very dependent on the tourism business and introduced a new pattern of behavior that didn’t necessarily exist prior to the increase of tourism in the region — following (bordering stalking) tourists to get them to buy handicrafts or souvenirs. For tourists, I think a good place to start is to consider activities or using operators who have good reputation of benefiting the locals and also having the minimum impact possible to the environment, and keep this in mind as you visit, learn, and appreciate the local culture, people, and environment that you visit.

The photo below was taken as we walked through the village. You can see the local homes on the side flanking a nicely path walkway through the village. On the left you see a small store selling some souvenirs. On the right is a normal home that was ‘normal’ and not staged for tourists at all. You see Kristi walking on the path, with one of the local girls jumping around like a ‘mountain goat’ (as May, our local tour guide from the day before, said). 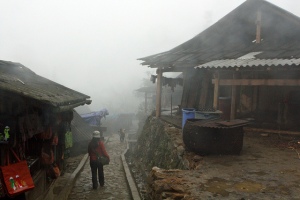