Ha Long City is a city in the northeast Vietnam about 160 km east of Hanoi. It was a port town where coal mined nearby was shipped from Ha Long City to southern China. Today Ha Long City has grown into a medium-sized city, and more recently due to the increasing popularity of the nearby Ha Long Bay as a tourist destination. The city is largely split into two parts, the Eastern part (Hon Gai) is where most of the government buildings and the industrial area is located, and the Western part (Bai Chay) is where the tourism industry is being grown.

While the growth of tourism definitely has affected the city, most foreign tourists who come there typically would go straight from their transit van from Hanoi onto the cruise boats, spent their time cruising in Ha Long Bay area, and then went straight to the transit van to go back to Hanoi. So they don’t necessarily come and stay in the city itself beyond the cruise. There is supposedly more local and southern Chinese tourists coming to the area, though it’s still pretty far from being considered as a ‘resort town.’

When we came to Ha Long City, it was pretty much like mentioned above, directly to the port in the Bai Chay area to board our junk boat, and when we came back, it was straight back to Hanoi. We did see parts of Ha Long City on the way out; clearly a growing city, but I’m not sure if there is compelling reason to visit as a destination when you have many other places in the country to see within limited amount of time.

The photo below was taken from our junk boat on the way out to the more secluded part of Ha Long Bay. It’s a quick glimpse of the more industrial part of Ha Long City. I wonder what the locals think of the booming tourism industry around them. Since Ha Long City is pretty much the main supplier for the cruise industry in Ha Long Bay, I’m sure they’re happy with the positive impact it has on the local economy. But they probably wish people would consider their hometown to be more than just a jump off point to get on the cruise. 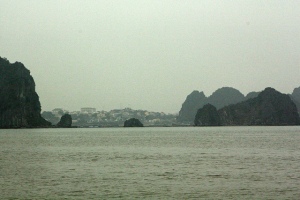