We had two fellow travelers in our Ha Long Bay cruise group named David. Both of them were part of Mrs. Hoa’s group; one was her son (whom we called Dave) and another one was her son-in-law (whom we called David to distinguish him from his brother-in-law). Compared to the everyone else in the group Dave seemed to be somewhat different; he wasn’t as outgoing or as lively, and I noticed that he spent some of the times alone carrying his big backpack. From the logo on the backpack (Lowepro), I knew it was a camera bag, and sure enough he had quite an arsenal of photography equipment with him.

I didn’t interact at all with Dave during the first day of the trip, but at the beginning of the second day, we were both up quite early trying to catch the sunrise. It turned out to be a cloudy day and we didn’t get as nice of shots as we were hoping for, but we did have some nice conversation that morning. It started similarly to my conversation with a couple whom we met in Sapa, with talking about our photography equipment. Dave also used Canon equipment, so he recognized the lens I had on my DSLR (the 24-70mm f/2.8 L with its recognizable red ring) and mentioned that I had a very nice lens to shoot with. He had many lenses along with him in his big backpack, including another ‘workhorse’ Canon lens model, the 70-200mm L lens (the big white lens with the red ring).

We continued our conversations also the next day on the way back to Ha Long City. It was interesting to hear that while it was fun to travel with his family to his mom’s home country of Vietnam, his primary reason for traveling was to take photos to add to his portfolio. He started getting into professional photography. He wasn’t quite to the point that he could make it a full-time job, but he wanted to continue building his portfolio and the trip to Vietnam and Cambodia was perfect for that. I checked out his website later on, and sure enough he had some very nice photos there. Some photos were recognizable from our trip in Ha Long Bay.

The photo below was taken while we were at the Cong Dam floating village. Here was Dave concentrating to take photos on the village life right in front of him. 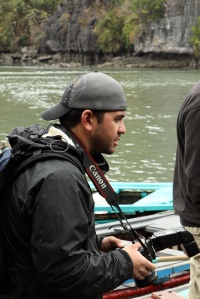