The last stop of our Southeast Asia trip was Singapore. We didn’t have much time left on our two-week trip, but we thought since Singapore was on the way home from Vietnam to Indonesia, we would at least include a stopover there.

For westerners coming to visit Southeast Asia for the first time, Singapore is often considered as the ‘Asia 101.’ The city is very modern and structured. Its airport, Changi International Airport, is considered as one of the main hubs in Asia, so you can easily find flights to Singapore from all over the world. You can get around with English easily, and the public transportation is very accessible in the small city-state area. Yet the influence from various cultures that make up Singapore population — Chinese, Malay, Arab, Indian — are still quite strong, so you can get a taste of those cultures during your visit in Singapore.

Given its close proximity to Indonesia, visiting Singapore is similar to Americans visiting the neighboring country of Canada. Many Indonesians would go to Singapore for short vacation. Some of my high school friends now even live and work in Singapore given the availability of job opportunities especially in high tech sector. For Indonesians, the two main attractions of Singapore are shopping and food. For Kristi and me, we didn’t care so much for the shopping part, but the food part definitely was the main draw.

Prior to this trip, I had only been to Singapore (if you could call it a ‘visit’) for few hours during a transit at Changi International Airport. So it’s pretty much all new to me. Kristi had been in Singapore several times before with family and friends. But she had not really spent time exploring the culture there before either. We only had less than one day to spend in Singapore (arriving in an afternoon, leaving again the following afternoon), so it had to be somewhat well-planned to make the best use of our time there.

We decided to use food as our ‘theme’ for the visit, so the goal was to try out several unique Singaporean dishes while we were there. As a guide, we decided to look at some Travel Channel programs covering Singapore: Anthony Bourdain’s No Reservations, Andrew Zimmern’s Bizarre Foods, and Samantha Brown’s Asia. We found information about some of the places these hosts visited, and decided to follow suit after seeing confirming good reviews about those places. Along the way, I also wanted to visit places that are uniquely Singapore like the downtown area, Raffles Hotel, Chinatown, and Little India. Quite ambitious for less than 24-hour visit, but we would give it a try.

The photo below was taken in an area in downtown Singapore called One Fullerton. You can see the iconic statue of Merlion, which is the mascot of Singapore. 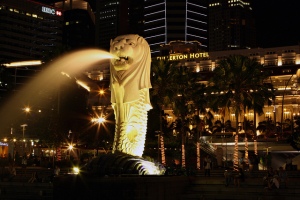