Kristi and I arrived in Singapore after quite a long day traveling from Hanoi that started with spending several hours at the Hanoi Noi Bai Airport due to flight delay. Once we passed the immigration at Changi International Airport, we were ready to head to our hotel in Singapore. We decided to take a taxi ride instead of the MRT as we did not want to deal with walking around and looking for the hotel from the nearest MRT station.

During this trip, we had mixed experiences taking taxi ride in the countries we visited. In Bangkok, we took a taxi that was decorated with disco lights inside and the driver playing Lady Gaga music. In Hanoi, we had bad experience getting overcharged in a couple of rides and in another case getting yelled at for requesting a ride that the driver thought was too close to worth a ride. So I was hoping for a better experience this time in Singapore considering it’s generally an English-speaking country and things seemed to be more orderly and supposedly the taxi drivers were more honest.

We started the experience with waiting at the taxi line at the airport. It was quite a long line; there were probably about 50 people in front of us. I think we waited longer to get a taxi than getting through immigration that day. What made it even a worse experience was the hot and humid weather; we had to adjust back to that kind of weather after spending a week in the cool Northern Vietnam winter weather.

We finally got a taxi cab assigned to us. The driver was an older Chinese gentleman. The taxi car looked like somewhat older, but it was very clean and it was quite modern inside with the taxi meters inside. I told the driver the name and the address of the hotel. He nodded, and off we went.

The ride towards downtown Singapore was pretty smooth; not much traffic until we got close to the Central Business District. I took my camera out of my backpack and took some photos from the back seat. The driver recognized that it was my first visit to the city, so he pointed to some newer parts of the city like the Sands Marina Bay building in the distance.

We arrived at a hotel near downtown, but it didn’t look like the hotel that we were supposed to go to. When I showed the hotel name and the address again, the driver realized that he had taken us to the wrong location. He apologized and we continued our ride until we reached the correct location. When we arrived at the hotel, I was about to pay the driver what was shown on the taxi meter when the driver told us he apologized for taking us to the wrong location, and he refused to be paid full price because obviously the ride should have been shorter than it was. The price for the ride was not that expensive, so I told him it’s okay that he gave us a little sightseeing tour of downtown area Singapore, and I paid him the full amount.

I thought it’s interesting to think back that this could have been another bad experience riding a taxi. But given the honesty and attitude from the driver, I was okay paying extra amount for the unexpected longer ride, in comparison to felling ripped off when the taxi driver in Hanoi told us that he didn’t have change for our large bill and didn’t even attempt to look at his pocket to see if he had any.

The photo below was taken from the back seat of the taxi cab as we’re getting closer to the Central Business District area of Singapore. 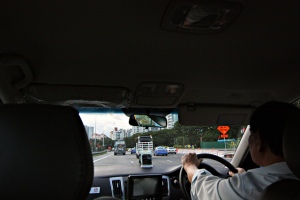 1 thought on “Taxi Ride from Changi”